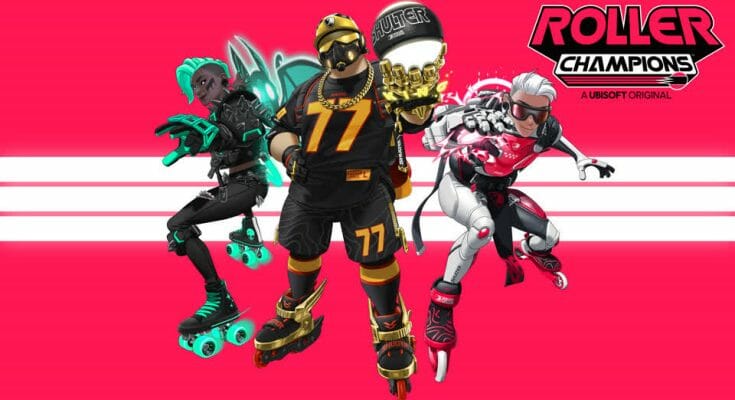 You have to make tackles to opponents in order to steal the ball from them, but there is no blood, no cry of pain.

Suitable for children from the end of high school or more. Online players can use their microphones or chat. Anyone can communicate with anyone at any time, unless you disable communication in the menus. So we can hear swearing and insults.

The atmosphere of the game is very positive, the game promotes healthy competition. Communication with other players is enabled by default, and it is impossible to control what other players say.

It is possible to customize the character: there are several skin colors available, however, there is little diversity in the body of the characters (they are all very muscular).

Must know how to read for a few years. There are a lot of texts and menus to read outside of the games, but once in the game starts, the player only has to focus on the track and the other players.

The player is constantly asked to buy downloadable content, that is, Roller Derby equipment for his character (helmets, skates, gloves, etc.). All these items are cosmetic, they do not allow the player to be better at the game. If the player plays without any purchase, his character will have a very dull appearance compared to other players who have decided to shell out money. This then motivates the player to spend in order to have a character that is much more aesthetic and attractive.

The game also contains “lootballs” (often called lootboxes). These lootballs contain random prizes. Fortunately, it is impossible to buy lootballs, they are obtained for free when the player increases his level. You can learn more about lootboxes here.

The equipment pieces that can be obtained do not improve the performance of the player, their only purpose it to make the characters more visually appealing.

We also wrote an article about the Battle Pass of the Fortnite game which is exactly the same principle as the Roller Pass of the Roller Champions game. You can read this article here.

You have to use all the buttons on the controller to master the basic controls of the game. To be efficient, you must be able to perform several complex button sequences. You have to use both joysticks at the same time to move forward and to look around or aim when you throw the ball into the goal. Like a real game of Roller Derby, you have to be on the lookout for other players on the field.

This is a game in which players compete 3 on 3 in Roller Derby matches that involves a ball and a goal. Players must shoot the ball into the goal in order to earn points. At the beginning of the game, the goal is closed. Players from the same team will have to make at least 1 turn with the ball in their team in order for the goal to open. At this time, players will be able to shoot in goal in order to earn points.

The arena of the game is in the shape of an ellipse. Players from the same team must pass the ball through 4 doors in order to make a complete turn. The more complete rounds the players of the same team make with the ball, the more points they will earn.

When the opposing team recovers the ball, the number of turns performed drops to zero.

A game is over when a team gets 5 points.

The points earned during a goal depend on the number of turns made around the arena:

To earn points, you have to throw the ball into the goal after completing at least 1 turn.

How to win a game

The rules of the game are complicated!

It is possible to listen to a video tutorial at any time in the game menu in the main menu. Essentially, the game is a mix of Roller Derby and Basketball.

Play in an arena where you can practice with 5 other players. There are no points counted, no teams.

Play a quick 3 vs 3 game with friends or random players.

Play against players in order to climb the ladder. This is the most competitive game mode.

Play matches with special rules that are available only for a limited time.

Play in a private match alone, with friends, or with artificial intelligence.

You can listen to the tutorial video again, practice in an arena on your own, or watch the list of commands.

Ubisoft allows the creation of a special account for children who are 13 years old and older. This account allows the following features:

The game will certainly offer several hours of fun. However, one has to be careful with the monetization of the game. There’s no need to shell out any money to play it, but the game will often make reminders of the rewards you could have earned if you had purchased the Roller Pass. It is very important to check how monetization works in the game before passing the controller to your child. Still, it’s fun to be able to play Roller Derby safely in your living room!

A free-to-play game in which you control remote-controlled cars that play soccer.