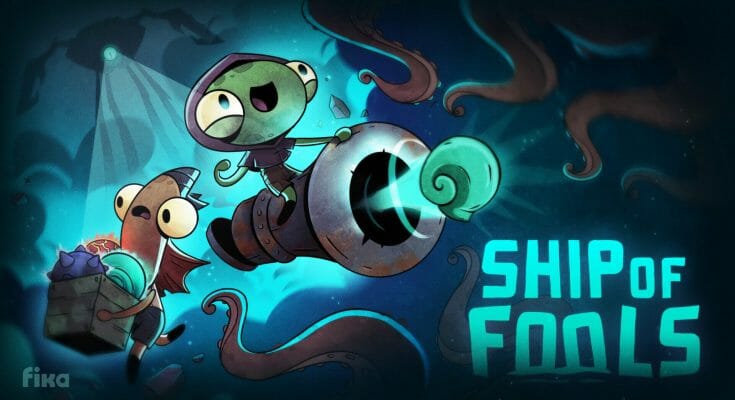 Ship of Fools is a roguelike cooperative game developed by Fika Productions, a game developer based in Quebec City.

We play as cute little monsters who must defend their ship with cannon shots against the hordes of sea monsters that populate the waters of the archipelago. In order to defeat the vile creatures, steal their treasures (and save the Aquapocalypse archipelago), players will have to show reflexes and collaborate with a friend in the defense of the ship.

The game asks us to fight monsters with cannons and harpoons, but the aesthetic is cartoonish and the violence abstract.

The aesthetic a little gothic could perhaps put off the youngest children, but again, the game is not made to scare the public and is more funny.

The game is quite difficult, even more so if your child plays alone. Ship of Fools was designed to be completed with others, and the weapon provided to help solo players (a cannon that fires automatically) hardly replaces a human being.

Ship of Fools is also a roguelike, that is, a game that invites us to start again several times, hoping to progress a little more with each attempt. In this sense, the game is not designed to be completed in one try.

Each failed attempt gives us advantages that make subsequent tries easier, but easily frustrated players may not benefit.

There are few buttons to remember, but you have to be fast and precise when aiming with your gun, in addition to managing several elements at once (moving the guns from one side of the ship to the other, reloading weapons, repairing the ship).

The characters can sometimes have a very slightly rude humor (within the limits of acceptable for a young audience, we reassure you).

You try to save the archipelago from monster villains, and you usually try to help its inhabitants.

There are some dialogues only in writing, but these are rather optional. However, it will be necessary to know how to read a minimum to understand the (simple) descriptions of the objects that we recover during our quest.

Ship of Fools, the first production of the small studio Fika Productions, is a game focused on cooperation. In fact, it takes a video game genre usually designed to be played solo, the roguelike, and adds a touch of cooperative party play à la Overcooked.

In a roguelike, the games are short and you are almost guaranteed to die before you get to the final boss. But every failure usually comes with permanent improvements that allow us to get a little closer to the goal with each attempt.

So we move our ship on a map of the ocean. On each square we see a glimpse of what we may find: trinkets that will give additional abilities to our character (the last ammunition of each gun will do double the damage, for example), new ammunition with special effects (eggs that explode in a small radius around them, dynamite that takes time to explode but causes significant damage) or even new characters.

But we also can’t avoid all the fights against monsters, because they are the ones that allow us to earn money that can be spent in the shops to repair our ship or buy upgrades.

You can play alone or with a friend (it’s even ideal).

You can play online, only with friends at the moment (impossible to be randomly teamed with strangers).

Ship of Fools is an impressive achievement for the first game from a small studio. Visually, the gothic cartoon style stands out admirably.

But the important thing is to know if the game is fun, and we would answer yes, but with a caveat. The pace of the game is frenetic; Monsters attack us from everywhere, and between the cannons we have to move on the boat and the ammunition we have to fetch ourselves, there are many things to think about and we have little time.

That being said, you don’t feel this frenzy as much when you play alone. The game is still fun (we played a few hours completely alone and had a lot of fun), but the real strength of Ship of Fools is when you play with others.

If your child has friends or siblings to play with, they may enjoy the experience. In fact, it may even be an opportunity to play together; The controls are simple enough that even a neophyte can quickly find their way around.

But if you’re buying this game for the sole purpose of having your child have fun on their own, Ship of Fools may not be the title to prioritize in this case.

More information about the game: Official page of the game