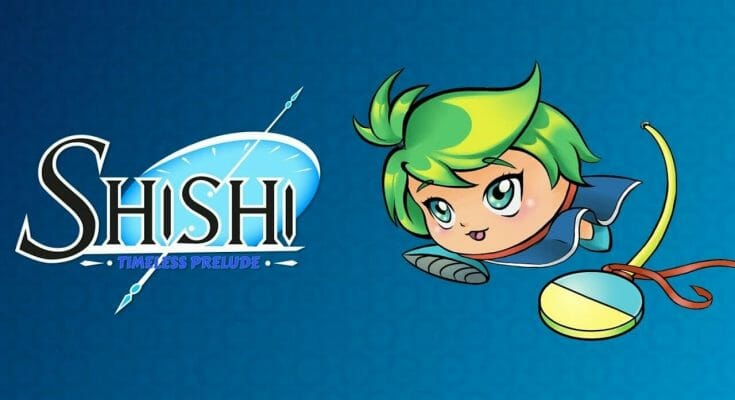 Shishi – Timeless Prelude is a colorful dungeon exploration game where a young mage named Elia must explore a sacred shrine to complete her training and become an Oracle.

Type of game: Role-playing
Average duration of a game: 30 minutes to 1 hour

Estimate of the total duration of the game:
30 minutes to 1 hour to complete the game for the first time.
5 hours to unlock everything.

The game was provided by the publisher for review, this does not influence our opinion.

Shishi: Timeless Prelude is a turn-based role-playing game with very simple mechanics: you can use a normal, less powerful attack, or a magic attack, more powerful but with limited use. It is necessary to find the element to which the enemy is fragile; fire enemies are vulnerable to aquatic magic, while aquatic enemies are easily defeated by electric attacks, and so on.

However, there is no text in the game. A young person who is not familiar with role-playing mechanics will have to guess how the different mechanics work, fortunately rather simple.

The graphics are suitable for children, the enemies are cute and not scary. There is no mention of problematic themes. Suitable for a very young audience.

Aside from a very short cutscene at the beginning explaining the context of the adventure, there is virtually no text throughout the game, nor any dialogue. The few words we find are simple.

There is little history in Shishi: Timeless Prelude. We understand that Elia, the young mage embodied by the players, must defeat this dungeon to prove herself worthy of her role as an oracle. She shows perseverance. Besides that, the game is mostly controlled on the game mechanics.

As mentioned earlier, there is very little text in the game. Each item in the battle menu is represented by an icon, which will allow players who cannot read to get by.

The game uses a turn-based system. There are no button combinations to press at the same time, and the player can take all his time to enter the controls. Even a player with motor limitations can find his account.

As the name suggests, Shishi: Timeless Prelude is a taste of Shishi: Ballad of the Oracle, a game still in development planned for the near future. It should therefore come as no surprise that the content is limited; we especially want to present the universe of Shishi.

Elia explores a randomly generated dungeon with each game. Like the games in the Zelda franchise, the heroine can break pots scattered throughout the dungeon in order to recover life, money and magic points allowing her to execute spells.

Battles take place on a turn-based basis. The player chooses the action he wants to perform this turn (attack, magic, potion) then the enemy also chooses his action and the player observes the results.

In the manner of rock-paper-scissors:

The central mechanics of this combat system are the elemental advantages. While exploring, the player finds spells of different elements that will be more effective against certain enemies. The challenge is therefore to find the spells that will defeat the enemies faster.

It’s a fairly common system (we basically find the same idea in the Pokémon franchise, to name a few), and presented in a very simple way.

Shishi: Timeless Prelude is a game that can only be played in single-player mode. The player completes his story, without interaction with other players.

In our opinion, Shishi: Timeless Prelude is a game that may struggle to find its audience. Both the aesthetics and the simple game mechanics to the maximum suggest that the game is intended for a very young audience, even preschool age.

But turn-based role-playing games are not a genre that is usually intended for very young players, because they require a certain level of attention and reflection that often escapes the youngest.

In addition, the fact that there is no dialogue or explanatory text may make the game difficult to access for younger players, who will no doubt ask their parents (or older siblings) for help.

More experienced players, on the other hand, will find the game too simple and the content too limited to find their account.

The developers have chosen to camp Elia’s adventures in a randomly generated dungeon, which changes with each game. It can stretch the lifespan a bit, but since the dungeons are very simple, offering no puzzles or varied settings, the effect may be limited.

We hope to see more content and variety in the mechanics when Shishi: Ballad of the Oracle is released.

If you want to introduce your child to the world of role-playing games, Pokémon Sparkling Diamond and Sparkling Pearl are a good place to start. The graphics are particularly suitable for a young audience, and the game features similar mechanics, but with a little more depth. However, the game requires a basic reading level (or help from parents).