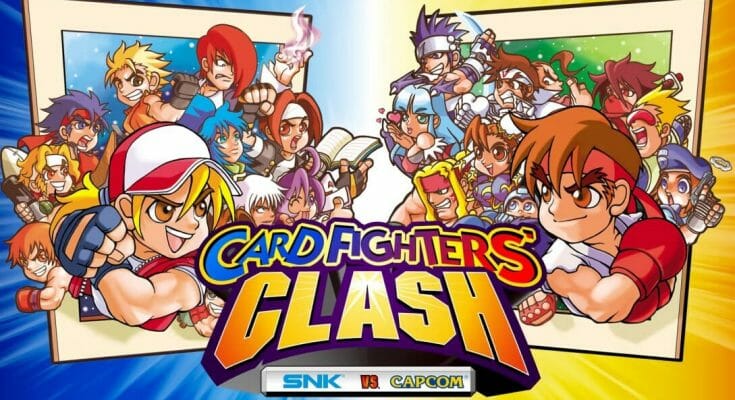 SNK Vs Capcom: Card Fighters Clash is a card game released in 1999 featuring characters from two Japanese publishers SNK and Capcom very famous for their fighting games at the time. Thus, like a game like Magic The Gathering or Pokémon TCG (Trading Card Game), players accumulate (in the game) cards drawn from multiple other video games and make them compete with special moves and the skills that characterize them.

The game was released at the time on the Neo Geo Pocket Color console in two different versions (SNK or Capcom), which are here compiled into one version. We choose at the start of the game, the version we want to play, and this will determine the starter cards. You can also change the version if you wish, and two saves are available to accumulate the cards and exchange them with the other version.

Estimate of the total duration of the game:
About 5 p.m.
50 hours if you want to finish everything.

Business model: Just need to buy the game once.

Number of players:
1 to 2 players locally.

The game was provided by the publisher for a review.
It does not influence our opinion.

The game has a progressive difficulty but it is not very complicated, when you understand the rules.

No problem. Characters compete against each other using cards. There are visual effects of fire, ice, electricity, or impact of blows on the cards as animation and that’s it.

The theme of the game is confrontation with card duels. Very common theme in playgrounds since always.

You have to know how to read in English and understand the lexical field of card games to understand. In addition, understanding the worlds of Capcom or SNK games at the time helps.

It’s just a matter of directing a character from above in 2 dimensions and choosing the menus you want. Very simple.

The player embodies a small character in 6 environments and chooses who will be his next opponent in the card game. He/she composes a deck of cards among all the cards he/she has recovered, in order to find the best combination capable of defeating the next opponents.

The game ends when the player has defeated all opponents in the game.

A single game mode in which you can go through the story.

You can play a duel or exchange cards with the other save located on the same console.

One can also accumulate points to unlock bonuses in the fighting game SNK Vs Capcom Match of the Millennium,sold separately.

If SNK Vs Capcom: Card Fighters Clash is a fabulous game I played in 1999, it’s hard to recommend it to everyone today. Indeed the rudimentary graphics of the time, the English language, or the need to know the characters of SNK or Capcom to enjoy the game, make the experience a little difficult for the general public.

Fans of SNK or Capcom have already jumped on the game, but I don’t know who else to recommend the game to. There is no problem with this Nintendo Switch version, it is a pleasure to find this game after so many years at a low price.

Note that SNK will release a new compilation with about 10 games including this game at the end of the year, as they did with the Neo Geo Pocket Color Selection Volume 1. It may be wise to wait for the next compilation so as not to buy the same game several times.