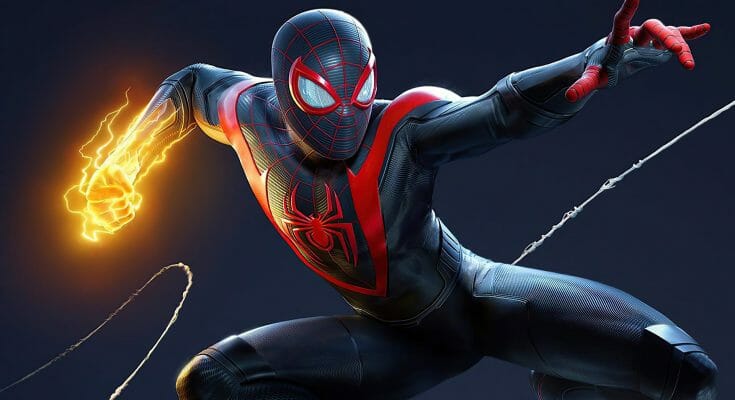 The game features Miles Morales, a resident of Manhattan, New York, who is bitten by a radioactive spider, and becomes the new Spider-Man. It is a 3D action/adventure game where the player can move freely around Manhattan and must do their best to protect New York City from attacks by gangs and crime syndicates.

The game is very similar to the Spider-Man movies released in recent years featuring actor Tom Holland. Humor and the second degree are present, nevertheless the story knows how to address sensitive subjects with accuracy.

The characters use punches, kicks, projections during combat. Miles can use electrical attacks. Some enemies use pistols, machine guns and rocket launchers during combat. Some traces of blood may appear.

Some cinematic scenes contain other violent acts such as a character being hit while he is tied to a chair.

The game requires a lot of dexterity in order to get by during the fights.

Superheroes saving the city. The main character is black and has friends and family members of Hispanic descent. There is ethnic diversity among the characters making up the story. Most problems, however, are solved by combat.

Plenty of reading required for documenting attacks, objectives, and tutorials.

The game is the sequel to Marvel’s Spider-Man also available on Playstation 4, Playstation 5 and PC. It is not necessary to have played the first to appreciate this title. It’s better to understand the story but at worst there is a small video recap available in the main menu.

It’s a great adventure, very cinematic where you play a Spider-man in the third person. The player faces crime, travels the city swinging between buildings, and fights many enemies in hand-to-hand combat.

The game is punctuated by cutscenes that tell the story, puzzles, puzzle phases, city exploration and challenges, in order to break the monotony.

Combat is the main element of the game. Often Spider-Man finds himself pitted against dozens of enemies simultaneously. He must then know who to attack, when to dodge, which elements to use at what time. It’s almost a puzzle to solve quickly, as enemies are constantly attacking and shooting at you. It is possible to reduce or increase the difficulty of the game at any time.

If you’ve ever seen a Marvel movie, it’s the same level of entertainment, violence and humor. This is an excellent game, ideal for discovering the power of the Playstation 5 or PC.

It is impressive technically, artistically and entertaining as well. A must-have but not suitable for young children.

Just like its predecessor, the game is fabulous and its execution is so well thought out that it’s hard to appreciate similar titles after that.

The game is now available on PC via the Steam platform. On Steam Deck, the game runs between 30 and 40 frames per second constantly, even when the graphics are in settings: Medium or Low. If it does not reach the standard 60 frames per second, it is still very impressive to run the city of Manhattan in this console/laptop.

Please note: On my desktop PC, I had trouble launching the game. Several times, I had the right to a black screen as a main menu. I had to change the settings (fortunately available outside the game as well) and restart the game several times to finally be able to play it.

The game is very demanding graphically, make sure you have a PC with components dedicated to Gaming before you get it. The minimum required components are available on the game’s Steam page at the bottom of the page.

In its PC version, Spider-Man Miles Morales has several graphical improvements over the Playstation versions.

Ray-based reflections and shadows*: Watch the city come alive with stunning ray tracing reflection and shadow options, with a variety of quality modes to choose from. The game features ray tracing reflection options with different quality levels and newly added ray tracing shadows for outdoor light projected by the sun and moon. This allows for realistic shadows with natural gradients of softness and further enhances the visual fidelity of Marvel’s New York.

Commands and customization: Experience what it’s like to play as Spider-Man with immersive haptic feedback and dynamic trigger effects using a PlayStation DualSense™ controller over a wired USB connection. Enjoy full mouse and keyboard support with various customizable control options.

Please note that the game is compatible with all other controllers (with enough buttons) as well.