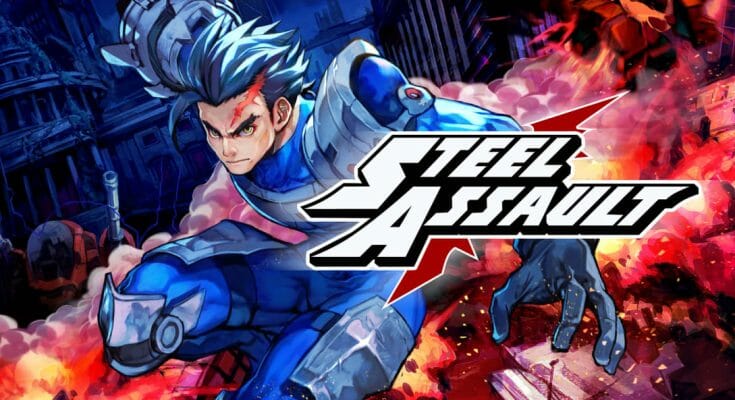 Steel Assault is an action-packed 2D platformer. The player takes on the role of a Taro Takahashi a super soldier capable of giving electric lashes and generating zip lines to make his way into a post-apocalyptic America. Taro’s goal? Take revenge on the dictator who controls the rest of the country.

The difficulty comes from 3 elements: the design of the levels, the placement of obstacles and enemies, and the rigidity of your character.

You can choose between 4 different levels of difficulty but it just changes the number of health points you start with.

The player destroys hundreds of robots constantly. This is fanciful violence. There is the presence of alcohol, and tobacco in the game.

Men who threaten to fight and kill themselves.

It’s a story of revenge and combat. If you saw an action movie in the 90s, it’s the same thing, no subtlety

No need to know how to read. Just a few basic menus, and a few sentences in the tutorial with icons.

The character can give lashes, create zip lines, jump twice in the air and perform slides. All this is necessary to get by in the face of the multitude of enemies.

The player embodies a Taro Takahashi a super soldier capable of giving electric lashes and generating a zip line between 2 parallel platforms in order to create a bridge or rope.

It advances in 2D levels from left to right and destroys a multitude of robots. After a few paintings crossed, he faces bosses. Bosses are large robots that have several attack motives and whose weak point must be targeted several times in order to eliminate them.

The game is very beautiful, and it is short. Less than an hour to go through it. And in general, I find this an advantage but this time is not well used.

First of all because the design of the levels is not neat. It is not clear where the platforms are. It is not known where one can attach the zip line clearly. There are so many details in the graphics that it’s often confusing. Even level outputs are not clearly indicated.

One gets the impression that the enemies are placed the right as an obstacle. Their use is not well thought out and does not often force the player to adapt other strategies. They just sometimes appear in large numbers and one must suddenly avoid their simultaneous attacks.

There is a story mode to go through all levels. When you die in a level, you get to the Game Over screen instantly, but you can start the passage or level in question again.

An Arcade mode is present and consists of chaining the course of the levels without backup. We can also start the passages at will in case of failure.

And there is a tutorial mode to learn the controls.

Some anecdotal options will allow you to display the game as if it dated from the 90s on an old cathode ray tube TV but that’s it.

Note that the game is displayed in 4:3 constantly and you can choose whether or not to display a border for the rest of the screen.

The game is really reserved for experienced players who like to repeat the same levels several times, in order to get the best completion times. You have to memorize the game to be able to get pleasure from it, otherwise the first parts will be very frustrating and unfair.

The fun comes from the mastery of the character and the game, and its graphics. If you don’t want to go hard, go your way.