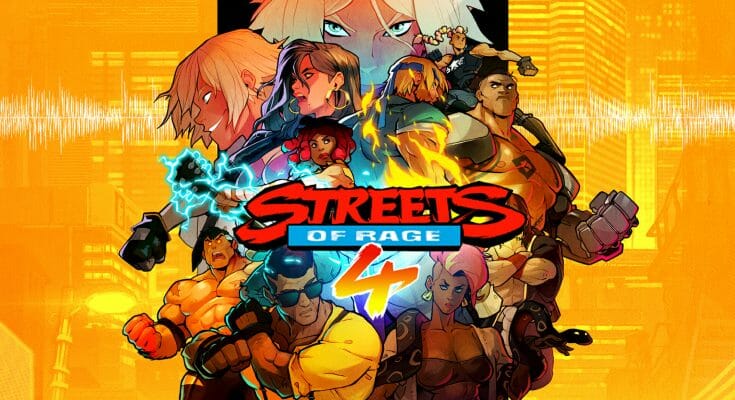 Choose your 4 favorite fighters and battle hordes and hordes of enemies in multiple levels. Streets of Rage 4 proposes to continue the famous saga of SEGA released at the time on the Genesis/Megadrive console.

Some characters are dressed in costumes highlighting their chests, or buttocks, as well as animations specific to these parts of the body. Some of the characters are in tight suits.

The protagonists provoke and taunt before or during the fighting. The phrase “p*ss off” appears during the game.

Choose your favorite hero and advance through the levels by hitting all enemies to advance. Multiple bonuses can be unlocked as progress, including characters from previous installments, can be unlocked in their original large pixel version of the Genesis/Mega Drive.

For an in-depth explanation of the game, please see this article.

Main Story Mode: Follow the progress of the heroes in their quests to defeat the crime syndicate and their bosses, the twins: Ms. Y and Mr. Y.
From 1 to 4 players.

Battle mode: Take on your friends in a closed arena of your choice, inspired by the levels of the main story. From 2 to 4 players.

Boss Rush Mode: Take on all the bosses in the game one by one in an arena, without having to go through the levels. From 1 to 4 players.

Arcade mode: Make the whole story without losing and try to get the highest score. From 1 to 4 players.

All local modes are available online, they are unfortunately only playable at a maximum of 2 players per game (while you can play 4 people on the same offline console).

It is not possible to play with a person playing on a different platform (console, computer).

A new extension has been announced. The only details revealed for now are in the video below:

Streets of Rage 4 is a great game. The care given to all facets of the game makes it unavoidable. It’s a lot of fun to go through it with your friends and try out the many possibilities offered by the characters. The sound design, that of the levels are also impeccable.

Only the online mode, limited to 2 players, not optimized in terms of performance and without communication between the different consoles leaves something to be desired.

Which is not as good as Streets Of Rage 4.