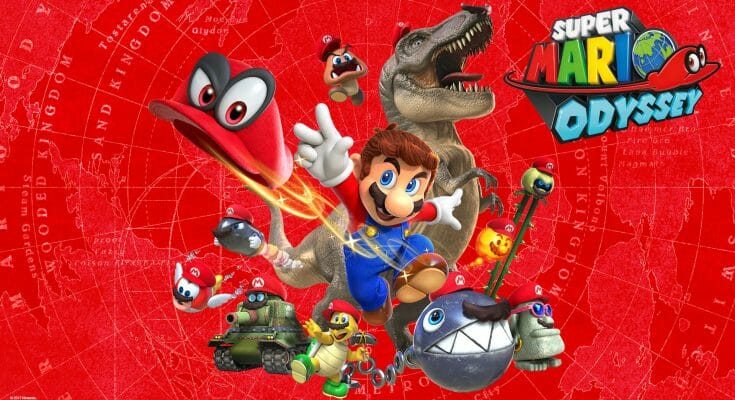 Mario must save Princess Peach from the clutches of Bowser, who has decided to kidnap her in order to marry her. Yes, Bowser is in love with Peach! However, Mario is accompanied by Cappy, a hat sound, which allows him to chapimorphos, that is, to take possession of the enemies and use their skills to cross the levels. Mario and Cappy will go through several levels together in order to pursue Bowser.

To defeat enemies, Mario must jump on their heads or attack them with the abilities of the enemies he has chapimorphosed in order to defeat other enemies. All the actions and moves take place in a world that compares to cartoons, all often taking place in a comic atmosphere.

The element that seems to be more problematic on the ESRB side is that Mario can chapimorphos into a tank that throws ball-shaped projectiles. However, the projectiles are far from resembling real weapons and the tank is more reminiscent of a toy than a real war machine.

A minority of levels have more gloomy moods and could perhaps create a slight fear in younger children.

In addition to the stereotypical scenario, the language used is positive, light and childish. The bosses will threaten Mario in order to provoke a combat situation.

Bowser kidnaps Princess Peach to marry her, against her consent. Peach is then in a position of vulnerability to Bowser, and must be saved by Mario. This stereotypical scenario is straight out of the 80s. Without disclosing the scenario of the game, it will take an interesting turn later in the story, which explains the Yellow rating.

The two-player mode requires them to coordinate and cooperate in order to pass the levels, which could create beautiful moments between parents and their children.

Not many texts to read, easy for those with little reading experience.

Mario has several skills that can be performed either with motion capture (by moving the Joy-cons), or by using the buttons to have a more traditional style of play. This versatility is interesting for those who have not yet fully developed their coordination with the buttons of the controller.

The game offers several combos of buttons, but their mastery is optional. It is possible to play the game with only a few buttons and movements with the Joy-cons.

The main menu gives access to the game controls with images to help with understanding.

Mario allies himself with Cappy, a hat that allows him to chapimorphose. Chapimorphosis allows Mario to take possession of his enemies in order to control them and use their skills. Thus, he will be able to take control:

Mario’s goal is to save Princess Peach, who has been captured by Bowser. Mario must use his flying ship in order to pursue Bowser around the world. Bowser will lead Mario to several levels, which are called “Kingdoms”. Each Kingdom is a level that Mario must explore from top to bottom.

Mario’s ship is propelled using moons. These moons are scattered throughout the Realms. Each Kingdom has a minimum number of moons to find before Mario can go to the next one. However, Mario can still return to each of the previously discovered Realms.

In short, there are three objectives:

There is only one game mode that includes the main quest.

The player who controls Mario will be able to use the usual skills of mario (jumping, sliding, running, etc.). The player who controls Cappy can move freely around Mario and use chapimorphosis on enemies that are further away from Mario. While Mario is chapimorphosed, Cappy can continue to move freely. Cappy’s controls are easier than Mario’s, so it’s a good opportunity for a young child to play with a parent.

The Super Mario Odyssey game lives up to its name. Indeed, Mario will be part of an odyssey that will take him to the 4 corners of the world. The several Kingdoms all have their peculiarities, characters and enemies, they are all different, which offers a nice variety. The player will always be surprised to see what he stumbles upon. Super Mario Odyssey is a game that is loved by many. It’s still relevant, and it’s a must-have for the Nintendo Switch.

A weak point of this game is the stereotypical story. It must be believed that Nintendo did not want to stray too far from the stereotype of the damsel in distress who must be saved by a man. However, it is a great opportunity to put this issue into perspective with your child to help him develop his critical thinking.

All in all, it is an excellent game that will certainly be enjoyed by everyone, including children, teenagers and adults, and it certainly has its place on our shelf.

More information about the game: Official page on Nintendo’s website