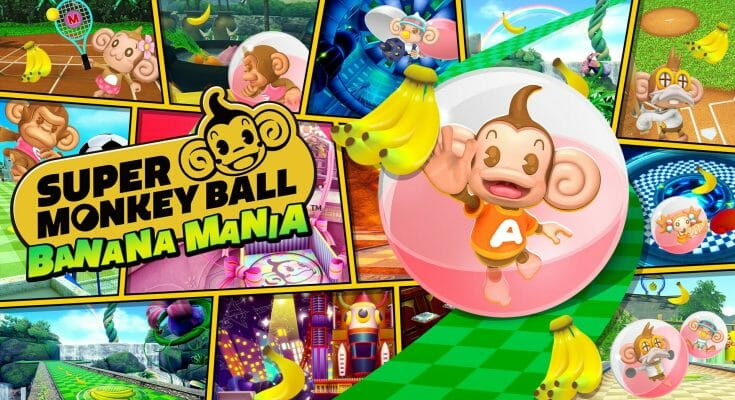 Super Monkey Ball Banana Mania is a puzzle game, platform. The player embodies a monkey in a ball that he must navigate to go through convoluted levels and reach the goal to be crossed of each of them.

The game has a progressive difficulty and some levels are particularly difficult especially towards the end.

No problem. Anthropomorphic animals that roll in bullets. There are mini-games with special features:

In one of them the player shoots at enemy boats in a first-person view.

Another Dogfight mini-game allows players to shoot pineapple-shaped missiles and cartoon-style pistol bullets at other characters. There are explosions, screams of pain and effects of screen movements to highlight the action.

The theme of the game is friendship, courage.

It helps to know how to read to understand the menus, but it is not totally essential.

These are optional and frankly useless expansions, DLC. Ignore that. More details below.

The handling is very easy but there are obstacles really twisted and in very large numbers.

The main game is to direct a monkey (or SEGA character) into a ball and make it cross a finish line. The difficulty comes in the design of the levels. If it is very easy to go from point A to point B in the first levels, very quickly the obstacles will push your monkey out of the level.

We can then start again immediately happily to infinity. Until crossing the finish line.

In case of repeated failures, the game offers optional help showing a supposedly optimal path and giving the player the opportunity to slow down the action with the trigger button on the controller. Despite this help, it is not always easy to cross the levels.

The levels often have very whimsical, even infernal or even sadistic designs. If it is funny to discover them, fighting on each of them more than thirty times is quite frustrating.

Instead of basing the game’s course on dexterity, SEGA seems to leave a share of luck to the player’s victory. There are too many moving parts, too many parameters that cannot be predicted, to achieve the goal every time. So we try, and we try until we finally triumph.

Sometimes the game helps us and lets us move to the next level without having defeated the present level but it does not bring satisfaction.

For veterans of the series: Everything has been redone in the Unity game engine. The physics of the ball are not strictly identical to those of the Super Monkey Ball versions of the 2000s. But the most notable difference is in the mini-games, which take the same principle as originally, but they do not have the same feeling in controller in hand. These are recreations of the original games, not ports.

Story Mode: A mode that allows you to go through the history of the game. Composed of a mix of Super Monkey Ball 1, 2 and Deluxe levels. 100 levels to go through.

SMB1 Mode Challenge: A mode to go through the levels of Super Monkey Ball 1. They are classified by difficulty and a certain number must be completed in a row to complete the challenge. To be reserved for experts.

Practice Mode SMB1: A mode to train on the levels of Super Monkey Ball 1 of your choice.

SMB2 Mode Challenge: A mode to go through the levels of Super Monkey Ball 2. They are classified by difficulty and a certain number must be completed in a row to complete the challenge. To be reserved for experts.

Practice Mode SMB1: A mode to train on the levels of Super Monkey Ball 2 of your choice.

If you have the opportunity to play with friends or family often, its mini-games are for you.

There is also a Story Mode Time Trial with the ability to take on the ghosts of the world’s best players.

And a Score mode to make the best scores on the mini-games.

One can unlock many SEGA characters like Sonic, Tails, Beat, Kiryu, or the old SEGA consoles playable instead of the original monkeys in the main game. Unfortunately these characters are not playable in the mini-games.

The “Deluxe” edition has the following bonuses for those who wish to pay a little more and encourage the developer and publisher of the game:

All this is dispensable, and optional.

Super Monkey Ball Banana is an excellent compilation of the previous games stated. There are plenty of things to do, to unlock. Unfortunately, the fact that the levels of the main mode are so often unfair will put off more than one person. There is still plenty to have fun with the wide variety of levels and mini-games.