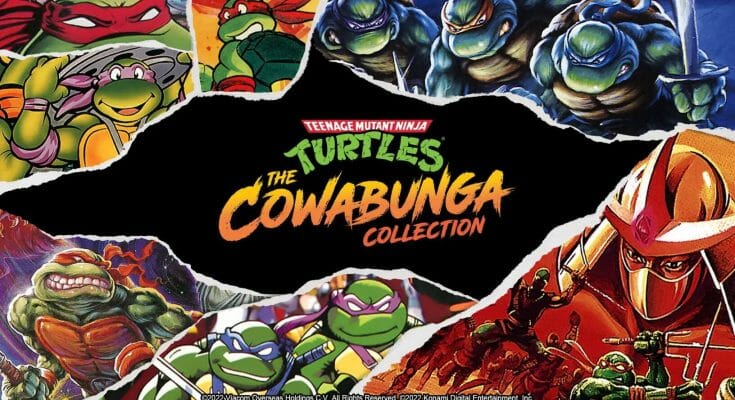 Teenage Mutant Ninja Turtles: The Cowabunga Collection is a compilation of 13 fighting, platform and beat’em up fighting games released between 1989 and 1993 by Japanese game developer and publisher Konami.

Everyone fights with punches, foot, knives, firearms, magical attacks (fire, wind, ice, electric). These are anthropomorphic animals, humans and robots that clash with each other. No drops of blood, or injuries. They are cartoon characters.

Very little text. Playable without knowing how to read. However, you have to know how to read to understand the side quests and some challenges.

It is possible to teach cooperation through this game, as long as you are well supervised and surrounded, but that’s it. The characters are smiling, having fun. No one takes themselves seriously.

Only the 3 Fighting Games Tournament Fighters can be considered difficult to master.

Teenage Mutant Ninja Turtles: The Cowabunga Collection is a compilation of the following 13 games:

Each of these games is playable in its entirety as at the time, and is available in American or Japanese version. The European versions are not available and no one will regret them because they had the same content as the American versions but was 17% slower.

Each of the games also contains the ability to go back in time. So you cancel the last actions that happened in the game, in order to repair an error, and avoid taking damage, for example. This option is available in 1-player mode, but also in local multiplayer mode. Thus, and fortunately, only the first player can go back in time. He can thus annoy his friends by abusing the function… but he will be the only one to do so.

It is possible to save and load a game at any time in each of the games. You can choose different display filters in order to try to reproduce the display of TVs and monitors from the time of the games.

Each game finally has several individual options such as the ability to activate the selection of hidden characters immediately, invincible mode, the deactivation of certain defects of era displays etc ….

In addition to this, one can activate for each game a spectator mode that allows to observe how to play the game perfectly. Icing on the cake, we can then regain control of the super player to continue his game. Unfortunately, you can’t unlock trophies or achievements this way. 😉

In addition to the ability to play each of the 13 games with plenty of options, there is the ability to check out a myriad of bonuses and material created for the Ninja Turtles at the time and their associated games.

It is therefore a Museum mode including:

In short, a huge amount of work has been done in order to search for and restore all this material.

Only 4 games are playable online (see game principle section). There is no crossplay (no possibility to play with other consoles). You can choose only one game at a time to wait for opponents (unlike Capcom Fighting Collection )

There are very few players online, they are divided into 4 games on 4 different platforms (3 consoles and PC). So we wait a very long time to find players. And when you find them, you have no idea if their connection is good or bad. Games slow down a lot when playing with 3 or more players, and it’s not the 2-player panacea either.

It’s really a disaster, and if we see the previous games released by Digital Eclipse, we can see that it will never be fixed.

With each Release of Digital Eclipse game, the developers promise us a compilation with a robust online mode… and with each release, fans are disappointed. This is not at all the expertise of Digital Eclipse and I wonder why they promote it every time, and bother trying to integrate it.

The compilation is really very solid, if you plan to play only locally alone or with friends. Don’t rely on online mode.