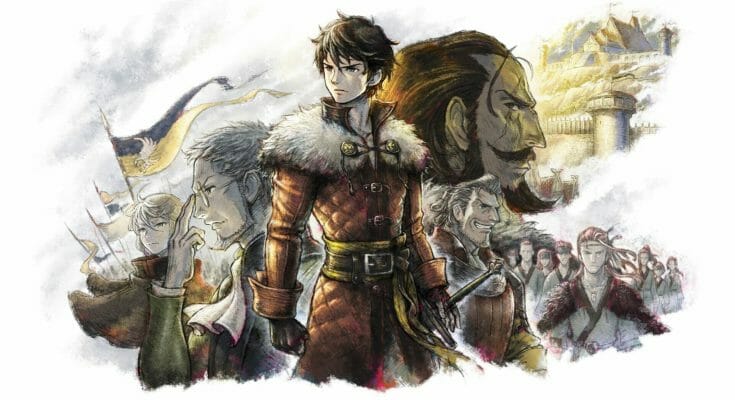 Triangle Strategy is a tactical strategy game that takes turns. The game offers you to play as the young lord Serenoa as he finds himself propelled into the middle of a political and military conflict that risks plunging the continent of Norzelia into chaos.

It is a tactical role-playing game (T-RPG) in which the player takes control of a small army of about ten characters. The player must move the characters on a checkered grid in order to eliminate the opposing enemies. Imagine a game of chess where each piece has its own personality and skills.

Between each fight, players witness cutscenes that move the story forward. On many occasions, the player must also chat with other characters in order to learn more about the world and its secrets, to probe their opinion or to convince them to support him in his decisions.

The game puts a strong emphasis on decisions:

Through his interactions with the other characters and the decisions he makes, the player defines the values of the hero between three major poles: morality, utilitarianism and freedom.

Throughout the story, the player must also decide dilemmas that divide his troops: should we participate in an illegal trade in exchange for provisions that could save the lives of our citizens, or denounce the shenanigans at the risk of our lives? Should we condemn an innocent population to avoid war or defend the minority and risk the lives of all our citizens?

By his decisions, the player changes the rest of the story. So there is a motivation to replay the game once the first part is completed, to see what would have happened if we had made different decisions.

The game requires a lot of strategy, but also great patience; sometimes we will have to repeat the same fights several times in order to allow our soldiers to earn experience points to give them a better chance of getting by. You also have to navigate relatively complex menus.

The themes of war and betrayal are explored. The violence is not very detailed since the graphics are pixelated, but it is not uncommon to see blood. Use of alcohol.

Triangle Strategy puts a lot of emphasis on the beliefs of the main character, Serenoa. Players, through their decisions, will have to define what the hero favors as values between morality, utilitarianism and freedom.

The title requires a good level of reading. There is a lot of text to read, and the register is quite sustained. Fortunately, most of the dialogue is also played by actors, allowing less skillful players to rely on audio.

The game uses a turn-based system. There are no button combinations to press at the same time, and the player can take all his time to enter the controls. Even a player with motor limitations can find his account.

Triange Strategy is a game that is only played in single-player mode. The player completes his story, without interaction with other players.

Triangle Strategy is an excellent role-playing game that offers a large amount of content and a complex and interesting game system. It’s nice to set up your strategies, and even start the levels again when you realize that your strategy was not optimal. The controls, well thought out, make the task easy.

However, the game is not for everyone; the beginning of the game is particularly slow. You have to enjoy watching a story take place passively; there is a lot of dialogue and reading. But once the story is set up, we find ourselves worried about the fate of this fictional continent and its inhabitants.

The themes are also relatively mature. The content itself is not inappropriate for a teenage audience, but the political nature of the story requires players to pay a great deal of attention.

We particularly appreciated the concept of choice. The dilemmas proposed are really heartbreaking, rarely a decision is imposed as the right one. These kinds of ethical dilemmas make the player even more involved in the story, since he sees the consequences of his choices, which he hopes to be the right ones.

Small shadow on the board; While the game’s visual style, which mixes pixels and 3D graphics, is impressive, the low resolution can make it feel blurry on a large screen. The game looks a little more visually beautiful when played in handheld mode.

That being said, for players who will get caught up in this story of war and diplomatic conflicts, Triangle Strategy offers a fascinating experience.

There is no doubt that Triangle Strategy was partially inspired by Fire Emblem. We find the same turn-based strategy system on a grid and the same war themes in a whimsical medieval universe. The tone of Fire Emblem: Three Houses is a bit lighter, however, putting more emphasis on the romantic relationships between the characters.