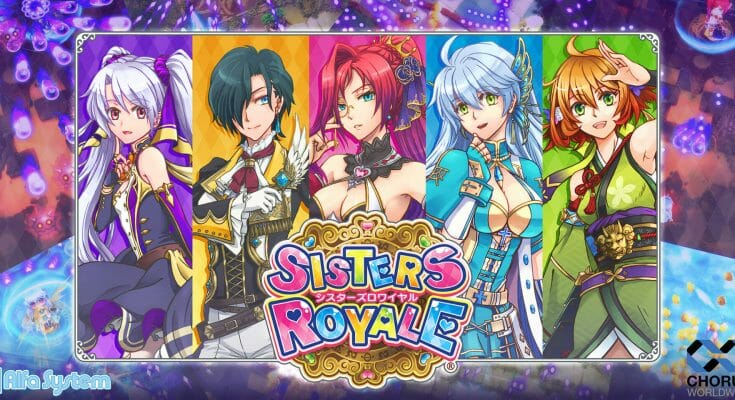 Sisters Royale is a vertical shoot’em up developed by Alfa System and published by Chorus Worldwide. Already released in Japan under the name Sisters Royale: I’m Being Harassed by 5 Sisters and It Sucks, the game is now available on Nintendo Switch and PS4 since January 30, 2020.

Beneath its appearances of anime fans with its artistic direction, there is actually a very pleasant production. Indeed, I would not have paid attention to this title, if I had not been reminded that Alfa System is also the studio behind the brilliant series of Castle of Shikigami (Shikigami no Shiro). This is a series of vertical shoot’em up also having experienced their heyday at the time of the generation of consoles of the Dreamcast, PS2 …

You choose one of the five sisters who all wish to marry the angel Yashin and you will face the other sisters through five levels, one of which is the consciousness of the chosen sister. Yes the scenario is as simple as that. A Royal Battle of Sisters in short.

Each of the sisters has different shots, invocations and bombs.

Summons reduce your travel speed in exchange for increased capacity and power.

They can oscillate between a monster that attacks all enemies automatically, leaving you vulnerable back, into another that absorbs all the shots in front of you until it is loaded and fires a big salvo back but making you vulnerable at that time too.

Anything is possible, and it’s great fun to experiment with each of the skills.

Bombs make you invincible for a few seconds and clean the screen as expected.

The know-how of the developers is there and appreciable:

But the game is not quite classic yet. Indeed, it lacks a mode 2 players to my surprise, yet a must of the genre. It would have been difficult to combine the stories of 2 sisters at the same time and do so many dialogues, but that didn’t stop other developers from tinkering with subterfuge in the past. By giving priority to the story of the sister of the first player for example.

Unlike other shoot’em up, your character walks through the 5 levels. This allows it to be affected by the environment. Whether it’s sliding ice sheets, windmills that regrow, or a level in the dark that requires the illumination of lanterns, the developers have tried to bring variety.

Because the game is short, very short. If it takes about 15 minutes to go, and it has just a normal mode and drive, and the continuouss are infinite, it is actually not in the classical way that it should be considered.

Sisters Royale is the heir to a genre that has fallen into disuse since the drop in arcade attendance. This is a game based on SCORING, i.e. making the highest score.

This title is made to be played multiple times and to optimize its score with each replay.

Each time you lose a continuous, your score is reset to 0, and at the end of your run, a detailed sheet of your scores is presented to you. There is also an online ranking.

Even in the way you play scoring is present, the closer your proximity to the danger, the more the score multipliers will be.

Sisters Royale is therefore a small production but a very enjoyable production to play with a very precise handling. No head-to-head here, we shoot and avoid enemy fire. It’s the perfect title to start or finish a gaming session, or for public transport. Its gentle price also makes it easy to give in to its sirens: $14 plus taxes.

Note that a sixth sister has appeared as DLC in Japan and will probably appear soon but she does not seem to introduce a new level to go.