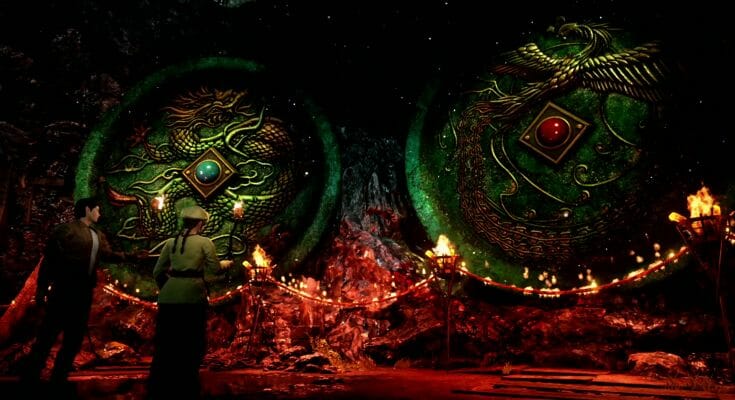 Warning: this review contains many spoilers/disclosures regarding Shenmue 1 and 2.

Being the direct sequel to Shenmue 2, it’s hard to advise episode 3 to those who haven’t experienced the beginning of the adventure.

Fortunately, Shenmue 1 and 2 HD Remaster are available cheaply on PS4, Xbox One, and Steam PC. At worst a short recap video exists in the main menu of the 3.

Shenmue 3 was funded in 2015 by a socio-financing campaign and by Sony. Indeed, it was at the Sony conference at E3 that the announcement of the Kickstarter was made. This was followed by a project financed very quickly and breaking all the records of the site at the time. 4 years of development and some controversies later as an excluded Epic Games Store while the game was promised on Steam, here we are finally with the final product. Yu Suzuki is behind Super Hang-On, Outrun, Afterburner and Virtua Fighter.

The author was able to get his hands on his Shenmue series thanks to SEGA, Sony, Epic Games Store and fans. He founded Ys.Net to take care of this project.

Shenmue 3 takes over strictly on the terrible cliffhanger of Shenmue 2 that left so many fans hungry 18 years ago.

We play our hero Ryo Hazuki again and after finally meeting the woman of our premonitory dreams and talking to her for hours in the forest, we find ourselves in the cellar in rural China.

With the lighting and illuminations in the cellar, magical things were expected to happen. Shenmue 2 indeed foreshadowed some supernatural abilities for Ryo.

Well that’s not the case, we leave the cellar just minutes after entering and we find ourselves in Shenhua’s house.

Suddenly, we start exploring the countryside of Bailu, and the original village of Shenmue 3, still searching for the murderer of the hero’s father, Lan Di.

But this quest doesn’t go easily, because the developers will force you to investigate with all the villagers, to find out where Lan Di’s men went.

You will have to follow their trail little by little, while trying each part of the game and other mini-games that the developers wanted to program.

Each time, as we have a new clue, the game finds us an excuse to try the combat system, try a game of chance, or look for objects in a house …

It’s really frustrating because after 18 years, you want to see the story go on, not look for papers from 30 drawers in a store.

The whole base of Dreamcast games is there, ie that many elements are making their comeback like the day/night system, the climate or having to go home at night…

A new system is also added to the list: it is hunger. Every few minutes, or after an effort, Ryo will be hungry and this will reduce his life gauge. You then have to buy a lot of food to be able to run and fight decently again. Feeding is just done via a menu and therefore it adds nothing to the so-called realism of the game. It’s just a way that developers have found to force players to spend money and thus do jobs, and therefore progress.

The buttons are virtually identical and have resumed the same configuration as in the recent Remaster.

Notebook, locking objects with the view, racing with the trigger, everything is there.

The lock works this time differently, in fact instead of locking one object and moving to another with the cross, it must now unlock, oscillate again with the stick towards the new object, and lock it.

It is therefore a new system that takes time to move from one object to another and quickly becomes tedious in the investigation phases.

With the old system, we didn’t always know what other object we were going to go in the next direction, but at least it was quick. A new indication in the graphical interface fortunately lets you know what can be targeted in the environment however.

This is a great feature of Shenmue 3 in its generality: the game is slow! Very slow, like those predecessors. The game design dates back 20 years. Ryo is still as rigid as ever, taking 10 seconds to remove his shoes before entering a house, he takes 10 seconds to put them back on when he leaves.

The dialogues are often silly and uns natural, they have above all a clear informational purpose.

Everything is done, so that the player appreciates the environment, is not in a hurry and stays for hours in the original village.

After it is a matter of point of view, some will appreciate the fact of taking their time, enjoying the present moment. Others will feel that developers are disrespectful of their time. After 6 hours of play, the player is still going through the first village where each game is unlocked as time goes by. You have to go back and forth so you can try everything and be able to progress, because the developers don’t give us a choice anyway.

The fight has changed compared to these predecessors, if it is finally easier to lock its target, now all the head buttons correspond to a shot and you have to quickly tip the stick in one direction to dodge. It’s a bit disconcerting especially when it’s the excellent Virtua Fighter system that used to be in the air.

If there’s one thing I can’t take away from Yu Suzuki, it’s his passion for martial arts. He inspired me 18 years ago to get into it, and he continues to do so today. Just like in the Karate Kid movies, the hero will have to train a lot, almost every day to defeat the various opponents standing in his way. He will have to be patient, perform domestic tasks that seem out of context but that make him muscle. Kung Fu masters behave like Master Miyagi in movies.

Learning perseverance, training every day, respecting your opponents is a life lesson that Mr. Suzuki learns and imposes on players.

As time goes by, after railing against the disadvantages of Shenmue 3, we get used to this particular rhythm, and the village becomes familiar.

We even start playing Shenmue as in an Animal Crossing: talking to all the inhabitants, performing tasks, doing business.

You can’t go faster than the music in this title, everything is done with perseverance and patience.

Another rare quality of the saga is its ability to transcribe life in Asia much better than the rest of the video game production. First Japan, then Hong Kong, and now the Chinese countryside, we see how their people live. We can follow their every move. They each have their own behavior, a routine. The music, the food, the holidays, the customs, all the Asian culture of the countries in question is transcribed.

It is truly a remarkable fact and it allows you to discover and appreciate a little-known culture here in the West.

Shenmue, who initiated the Quick Time Events known as QTE to the general public 20 years ago, strangely has very few in this episode. It takes more than 20 hours of gameplay to be suddenly caught by surprise by a QTE in a cinematic. So we miss it the first time, especially since it is very fast. All QTEs are very fast compared to predecessors. We barely have time to react and we are forced to start the sequence again by memorizing each of the buttons as we go along.

I don’t understand that choice. Maybe the developers wanted to show us every branch of their cinematic at all costs.

I was able to observe once, that when you don’t touch the controller for several minutes, Ryo can automatically move to the next lens.

I do not know exactly when that can happen. I guess it is when you have a specific destination, and not in the case of investigations. I have not seen other people talk about it and I have not tried to replicate it any more.

The game took more than 4 years of development and honestly it shows, the graphics are sumptuous, there are thousands of lines of dialogue for the hundred characters that are either dubbed in English or Japanese as you prefer. Everything is also subtitled in the 2 languages mentioned above in addition to the 5 “standard” languages such as French, Spanish….

Yu Suzuki really wanted to make a Shenmue 3 at the height of the 1 and 2. It’s also amazing to see what the team has achieved with so little money and time.

So it’s not a sub-Shenmue, it’s a complete Shenmue to which we are entitled. We can thank its creator and the fans for being able to realize their dream after so much time and we will not sulk our pleasure.

While Shenmue 1 and its sequel have revolutionized the industry and inspired many designers, 18 years later, Shenmue 3 is now a UFO. He is constantly forcing you to contemplate the environment, to take your time, to make you appreciate martial arts, in a time when everything is going fast.

Fans who expect to finally finish the story will be disappointed, indeed we will have to wait for a possible sequel. However, it is difficult to know whether it will be funded or whether it will take another 20 years.