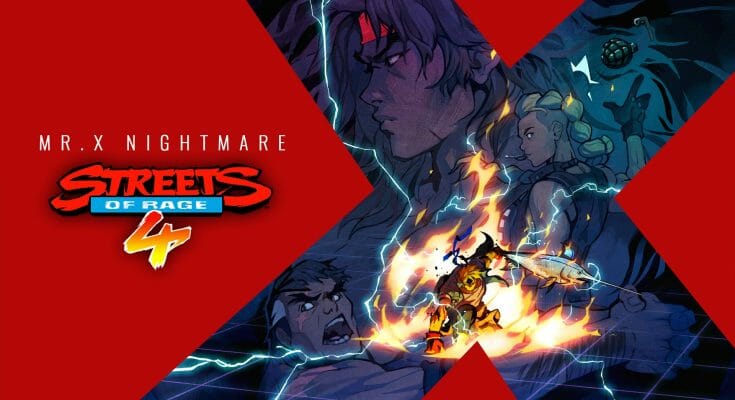 More than a year after the release, and after 2.5 million copies sold, Streets of Rage 4 gets additional content to download.

If you don’t know what Streets of Rage 4 is and if it’s appropriate for your kids, check out our fact sheet here.

If you would like to read our written opinion at the time of the release of this one, click here.

Entitled Mr. X Nightmare, the new downloadable content (DLC), released on July 15, 2021, promises us all this:

And for all owners of the game, even those who have not purchased the additional downloadable content, they are entitled to a free update when they start the game including:

In fact, what does this mean?

Then the bonuses of the free update are very nice. The training mode allows you to either train freely or learn the basics of the game via a tutorial broken down into many parts. It starts naturally from jumping, giving blows, and it goes up in level until it gets to advanced combos. We see that the developers are big fans of fighting games and have made sure that their game leaves a great freedom and creativity in the movements of their characters. The mode is reserved for a single player.

Now each character created for Streets Of Rage 4 (i.e. not those of Streets of Rage 1,2 and 3) has 4 color palettes. As in Street Fighter 2 Turbo at the time, players can now select the same character several times and will all take a different color in order to differentiate them.

The addition of the Mania+ difficulty level is always nice but will be reserved for those who already have a lot of experience with the game and who appreciate a very great difficulty.

For $9, basically, you get 3 new characters who were previously bosses in the story mode.

They are very enjoyable to play, each of them, and very different from each other.

And you get a survival mode. This mode consists of trying to defeat as many levels as possible without losing. We lose if all the characters played are defeated by the computer. The mode is playable from 1 to 4 players.

The more you play this mode, the more you will unlock alternate moves for each of the characters played. These moves can then be selected and allow you to renew your combos and ways of playing.

In survival mode, you’ll encounter lots of enemies from Streets Of Rage 1, 2, and 3 that you hadn’t seen in story mode before. There has been a huge amount of work here on the part of the developers to piece together all its enemies how they were at the time. Whenever you encounter an enemy, you “collect” him and you will be able to train against him in free training mode.

To conclude, it is a pleasure to relaunch the game and discover new content. Survival mode, if it seems anecdotal at departures, has what you occupy for many hours, if you hang on. On the other hand, it will of course be more pleasant to go through it repeatedly in the company of friends.

Unfortunately the big problem of the game, and it has not been solved with this extension, is the fact that the online mode is limited to 2 players and the network code is not very good. The online games where it slows down are legion and the servers are not very populated either. It will therefore be necessary to rely mainly on local play with your friends on the same sofa to enjoy this excellent title.

The game and downloadable content were provided free of charge by the publisher for review purposes. This does not influence our opinion of the game.