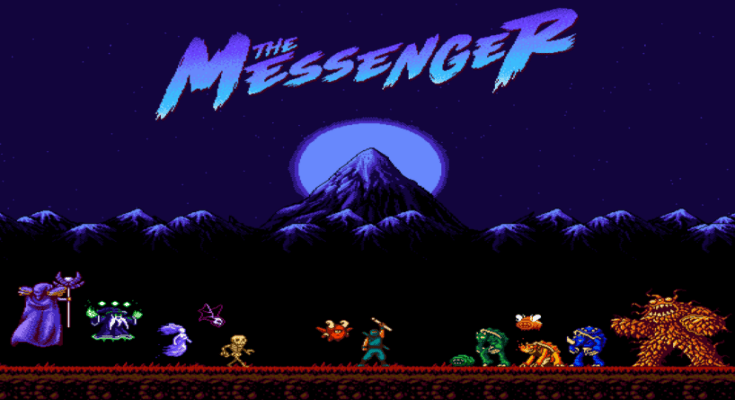 I’ve been hearing about The Messenger for months, without really paying attention to it. I see the game appear in the events, in the trailers, and even highlighted by Nintendo, and by far it looks like yet another traditional indie game as we have a lot of opportunity to see it in the pool of Quebec studios but with a consequent hype.

And then suddenly he came out.

Created by our neighbours at Sabotage Studios in Quebec City, The Messenger is a platform game directly inspired by Ninja Gaiden games released on NES. The game mentions this reference from the first minutes of gameplay.

With titles such as Shovel Knight, Volgarr, Mighty Gunvolt Burst, Bloodstained Curse of the Moon, and so on, games with 8-bit – 16-bit graphics have been on the rise in recent years… The Messenger is a game that traditionally begins by playing as a ninja and jumping on platforms in 8-bit environments.

You chain the levels linearly. You get new mandatory skills to overcome certain obstacles as you go along and you can also improve them optional by collecting the game’s currency and buying your upgrades from a merchant available throughout the game (like Resident Evil 4).

One of the main mechanics is being able to make an extra jump each time your character hits an object or enemy that can be hit. Concretely this gives: jump – enemy strike – second jump.

And the game will require you to master this ability to get out of it. Many puzzles, passages are based on it and will give you the impression of having done something very stylish once crossed.

The first hours of play take place quietly, we discover the new capabilities, we appreciate the interesting level design, and the graphics very neat and we gradually decrease the volume of the Switch …

Indeed, the soundtrack is repetitive at will and composed of shrill sounds. We’ve listened to better chiptunes compositions before.

For once, a game is not devoid of humor. Not only do developers not take themselves seriously, but they take great pleasure in breaking the fourth wall often in their dialogues.

Dialogues that you can also find in multiple languages such as English, French, German… and surprise … Quebecers.

Very different from the French translation, Quebec is written as it is spoken, a bit like the Quebec translation of Super Mario Galaxy at the time.

The game is very fun to browse, your ninja responds to the finger and the eye.

The difficulty is well calibrated and the game never seems too unfair with the player. Some passages won’t stop you from raging though.

Turn the situation around!

And lo and behold, The Messenger is a good little game… except that there is a twist….

Revealed everywhere before the release, but only appearing after several hours of play…. The game goes from 8-bit to 16-bit graphics when your ninja crosses a specific portal.

But it’s not the only change! We then discover that the game is not linear as the first Castlevania on NES and SNES, but becomes a Metroidvania.

Skills will allow you to access previously unattainable areas and passages.

And new mechanics and objects will play with duality versions of your 8 bit /16 bit character. The game screens are also different between the two, and some passages are revealed only with one or the other, in the manner of Zelda’s Dark World – A Link to the Past, or A Link between Worlds.

Unfortunately after this twist, the backtrackings become incessant and long. Teleporters are present but only number 1 per area and each area is quite large. The difficulty also increases, and in some parts of the levels it almost looks like Super Meat Boy. You will have to keep your composure to cross the lasers, platforms above the clouds and other joys …

The rapid pace of level succession is suddenly slowed down and marred by these back-and-forths.

The game has a title far too common; while doing my research for this article, the various sites have often sent me to objects, media that were not related to this production, and I think this can sabotage (yes I dare) its success unfortunately.

Aside from that, you can’t go wrong when you buy this game, it has something to keep you busy until the upcoming arrival of the blockbusters at the end of the year.

Allow about a dozen hours depending on your pace to complete it.

Your fingers will remember your passage on the title, indeed after a few hours, the joycons reveal their weaknesses in the face of moments of intense but yet jubilant fighting and platforms.

Version and media provided by the publisher.