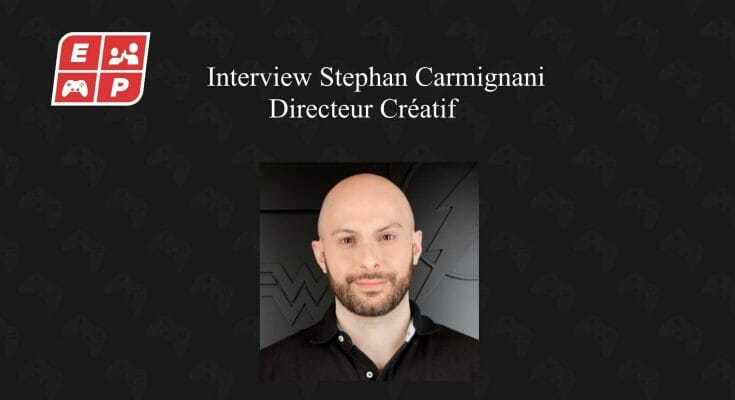 I knew Stephan thanks to the many forums and knowledge we have in common. He welcomed me when I had just landed in Montreal and since then, he has become a parent and has progressed significantly at the professional level, giving him a great expertise in the industry.

I want to talk to him today because I know that he wanted to work in the video game industry for a long time and that he succeeded in doing so. I think his background can inspire children, teenagers and students who aspire to join the industry.

Hello Stephan! Could you please tell us what your current profession is?

What were your different jobs in video games?

Stephan: I started 22 years ago at Infogrames in Lyon, France as a Q.A tester, mainly to have a source of income to pay the rent and my expenses. It immediately rekindled the flame of video games and I slowly gave up studying and invested more time on my work. I then became a Level designer at Étranges libellules another Studio Lyonnais, and from there it officially became a full-time job with a salary, a project, responsibilities etc.

Stephan: At the time (1998/99), there wasn’t really a school dedicated to video games. I studied psychology at the University of Lyon 2, and I followed a multimedia training. I learned all the tools and editor myself in my spare time!

Stephan: I got into the industry by chance. For the little anecdote: a person with whom I was studying at university arrived one day with a t-shirt “dev tester” during one of our classes. Intrigued I asked him what it meant, and a week later I was interviewing Infogrames to join their Q.A. team I started making money and the flexibility of schedules worked perfectly with my university courses. Very quickly I changed division within Infogrames and I could see “the other side of the coin” or “how professionals make video games”. You should know that at the time my only experience in the field was through levels that I created for Counter-Strike, Doom, Unreal Tournament etc. I was very active in the world of modding (modifying released games) and creating levels for known multiplayer games. It was really when I joined Strange Dragonflies that I realized that it was not just a phase to pay the rent but perhaps a career that was available to me. So I put studies aside and have never returned since…

I then worked for various independent studio in Lyon, and I was contacted one day by Ubisoft Montreal to work on the Rainbow Six license as a level designer (all his hours creating levels for Counter-Strike alone in my university room had finally paid off…). And since I didn’t leave Montreal, I had the chance to work on Rainbow Six, Splinter Cell, Deus Ex, Army of Two, Batman, Transformers etc. and I never questioned my career choices.

Marc: What does a typical day as a Creative Director look like?

Stephan: It really depends on the development phase that the project is in. In the design phase my job is to do research, retrieve references, do market research, and come up with ideas for potential projects that obviously must correspond to different criteria / values that align with the company for which I work. Once we agree on an idea, the exploration phase begins and we try to push the concept as far as possible. So it becomes a team effort. In pre-production I make sure that all topics are treated in order of priorities and risks. Most often with a mix of technical demos and validations of different design ideas. The focus at this point is on what are called “key ideas” that define the identity of your product. Then in the production phase, in general I like to take care of the level design and the creation of environments with the design and art teams!

Marc: What are the points you enjoy the most while working in the industry?

Stephan: It’s an environment that usually goes very fast. Many ideas are born, die, validated or rejected, and all this is done very quickly. It’s also an industry that requires reinventing yourself and learning new tools regularly so you constantly feel like you’re advancing in your career. Working on major projects with large multicultural teams is an extremely rewarding experience.

Marc: What are the negatives when working in the industry?

Stephan: It’s a very competitive environment. Things are moving fast. It’s clearly an environment where you have to re-invite yourself on a regular basis and learn to make concessions. It is also an industry that is still very young and I would say that, unfortunately, we often learn by making mistakes.

For many people working in the industry, their work is also their passion so it’s sometimes hard to find a work-life balance.

Find the rest of the interview here.