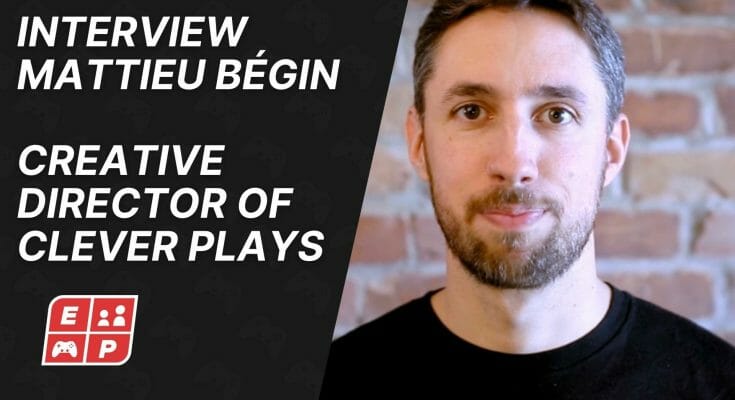 Mattieu Bégin is the co-founder of clever-plays. His studio has been around since 2013 and continues to be successful today.

On the occasion of the release of the new free update of Operation: Tango, Mattieu answers our questions!

The game is currently discounted on all platforms.

To purchase the game on Steam PC, click here.

Here is the interview:

Hello Mattieu! Could you please tell us what your current profession is exactly?

I’m the creative director at Clever Plays, the studio I co-founded. But given our very small size, I also have several other roles, such as producer, game designer, level designer, writer, tester, integrator, etc.

And is this your first job in video games?

No. I started as a game designer at Ubisoft Montreal in 2008, where I stayed for 6 years before founding Clever Plays. Before that, I co-founded another company, Paragon Publishing, to create pdf products compatible with Dungeons and Dragons v3.5.

A DESS in game design at the Université de Montréal.

Basically, I am a geneticist and biologist, with a PhD at the interface of these two disciplines. I worked as a researcher for 8 years in academia. That’s when I decided to make a career change to video games and go back to school for specialized training in games. But I brought with me a lot of skills acquired in science, such as the ability to manage a project, analytical skills, an ability to study complex systems, and a lot of the resourcefulness that characterizes researchers. It must also be said that since my childhood, I design card, board or role-playing games to play with my friends. So I already had a lot of game creation skills and experience when I arrived in the field.

What does a typical day look like as a creative director at Clever-Plays?

A creative director must consider all the elements that make up a game, that is to say its user experience, its graphics, its code, its music, its marketing, etc. and to make sure to communicate the direction well to the people who work on these aspects, in order to create a coherent whole that will meet the objectives. It is a profession that requires to have a good overview, to know how to speak their language to each specialist, and to know how to inspire confidence. My days always start with a team meeting where everyone explains how yesterday’s work went and what he/she will be working on today. This is followed by other meetings, often with only one person at a time, to discuss different problems to be solved, decisions to be made or validation to be made. In the afternoon, I then have time to do my own tasks and put on my different hats, maybe design a new gameplay feature, or write dialogue lines, or prepare the Steam page of the game.

It’s an industry that relies on the passion of people, both consumers and developers. It’s very challenging and very creative. A video game is actually an experience that you give to a player, and so you work to make people live dreams. In montreal’s indie industry, another positive point is the spirit of mutual aid and camaraderie that exists between small studios, you feel like you belong to a big family.

As a director and co-founder of a studio, there is a lot of stress. Games often have release dates to meet and it’s very easy to spend more time and money than you’d like on developing a game, in order to make it better. Games are also sometimes less fun than you would like, or are buggy, and you have to find solutions quickly or you will put a non-competitive product on the market.

Attending a training program is not enough. You have to be passionate about your field and make personal projects. Too often I see students in a program whose only portfolio is teamwork done during that program. Not only do you have to know how to showcase yourself in front of other juniors who are trying to integrate the industry, but also you have to practice practice. One does not become an artist / programmer / designer / etc overnight by doing only the minimum required.

What advice would you give to parents who want their children to play in moderation?

Being a parent, I had to learn to face this problem. My number 1 rule for kids: avoid monetized free-to-play games. These games are normally based on a game loop that encourages you to re-play regularly, often more than once a day, to get rewards, which makes the child addicted and creates a lot of frustration if prevented from returning. Instead, it’s worth spending money to buy games with a traditional structure that don’t create this addiction. Also, it is better to choose games that have a short-term play loop, because it is easier to take the child out when it is judged that he has played enough, rather than interrupting him in the middle of a long session, which tends to cause bad mood. In the end, you have to get involved, know what your child is playing, and guide him towards experiences that facilitate the management of his play time vs the other aspects of his life.

Do you have any other tips for parents who don’t know a video game?

There is no secret, you have to be interested in it to understand what your children are playing. For example, some games can induce a high level of stress or competitiveness. If the child is sensitive to this kind of thing or if he plays it before sleep time, it will be harmful. One can arrange particular games at certain times of the day / week. If they are well supervised, children will be able to benefit from the good aspects of the games, such as sociability, learning the language and maths, coordination, reflexes, familiarization with technology, etc. And it’s important to explain all this to the child too, so that he understands what is good and what is not good in video games, which can help him as a teenager to make better choices.

I just finished playing Hades recently, a beautiful roguelite that raises the bar in terms of polish for a non-AAA game. And after reading the book on its development, I brought out the good old Spelunky that I had not played for several years. A brutally difficult classic but so impressive in its emerging design.

My son and I played Monster Hunter Stories 2. It is a good game not violent for the 10+ years old that works the memory (the fights are based on memorizing the attack patterns of the many monsters) and that offers a beautiful adventure in the Japanese animation style. Otherwise, Minecraft is an obvious choice.

Mattieu, on which social networks can we find you? Do you have any creations, sites to promote?

We recently launched the game Operation: Tango,a cooperative spy game that is played by two. Perfect for a parent with his teen, or a gamer with his partner.

Mattieu, thank you very much for your time and advice.