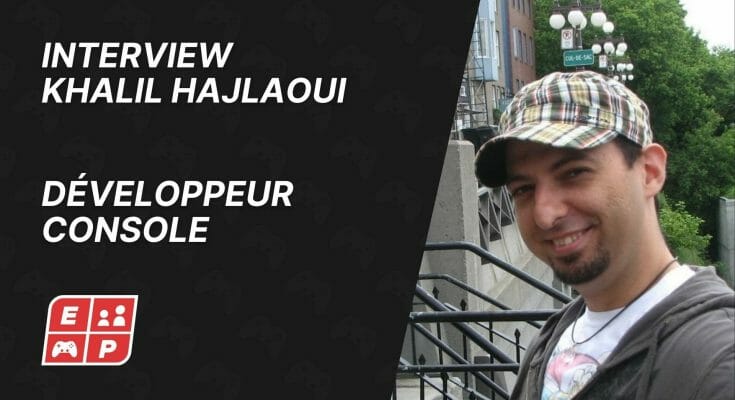 Khalil is my friend, at first we knew each other through our previous jobs and then we noticed many points in common including our passion for good Japanese games from SEGA, Nintendo, Capcom, SNK… and the arcade.

Today I want to talk to him because I think his journey can inspire children, teenagers and students who aspire to join the industry.

Hello Khalil! Could you please tell us what your current profession is?

My current position is a console programmer at Digital Extremes, I am in charge with a team of porting the Warframe game to the different home consoles (Playstation, Xbox and Switch)

And is this your first job in video games?

I followed a bachelor’s degree in electronics and programming that I completed in Brussels, Belgium. In 2009, I decided to come to Montreal to follow a 2nd cycle degree in video game development at the Ubisoft campus and which was offered to students in collaboration with the Université de Sherbrooke in Longueuil.

I have always been passionate about video games since my childhood, especially on console with Sonic on Megadrive (Genesis) which was a revelation for me. Since then I have always maintained this passion on home consoles, portable consoles and arcades.

At the end of my high school, I did not think that it would be possible to make a career in video games: at the time there were not many companies in Belgium and the training was insufficient not to say non-existent, which did not offer a stable perspective in this sector. In 2007, I worked in a computer consulting firm for 2 years, and that’s when I heard about the Ubisoft campus in Montreal: there were already other courses in France and Belgium that were starting to offer a program dedicated to multimedia, but they were complete courses of 2 to 3 years and were still too generalist, unlike the Ubisoft campus which offered a real specialized training in 1 year. It was an opportunity that I jumped on and decided to take the steps to have a student visa so that I could come and study in Montreal.

Since my arrival in 2009, everything has gone quite quickly, with various job offers at the end of my studies, which have allowed me to settle in Montreal and make my passion my job until now.

What does a typical day look like as a programmer?

A typical day of a programmer is:

I would say that what has marked me the most is:

The development of a video game is a collective work in which everyone has a role to play, collaboration is essential and involves several responsibilities, I would say that the points that must be remembered:

The best advice I could give:

What advice would you give to parents who want their children to play in moderation?

For my part I found several solutions:

Do you have any other tips for parents who don’t know a video game?

For young players, choose Nintendo handheld consoles, such as the Nintendo DS or 3DS for small budgets or the Switch for a larger budget.

Also with the rise in the prices of the latest generation games, a good alternative is to shop on the second-hand market

I currently have a very long list of games for which I take the time to play them depending on the moment, it will:

I alternate a lot between the Playstation 4, for solo sessions, and the Switch, for family sessions.

As I am a great nostalgic for the games of my childhood, I would tend to discover older games that have marked the genres and that, I think, allow to maintain a video game culture that is sorely lacking in our time. Fortunately many titles have been redone or brought up to date and can easily be played, so I will advise, for the youngest:

Khalil, on which social networks can we find you? Do you have any creations, sites to promote?

I am present on LinkedIn,I also plan to give evening classes in video game programming, a continuing education that will be given in the college of Bois de Boulogne, in Montreal, Quebec.
I’m also working on a personal project with a former colleague but I can’t say more at the moment, I hope to be able to present something by the end of the year

Khalil, thank you very much for your time and advice.

Former video game programmer, columnist for RDS Video Games, teacher, competitor ... Marc has always been very familiar with the world and industry of video games. He decided to help neophytes about it, to discover new universes, worlds and fantastic creatures.