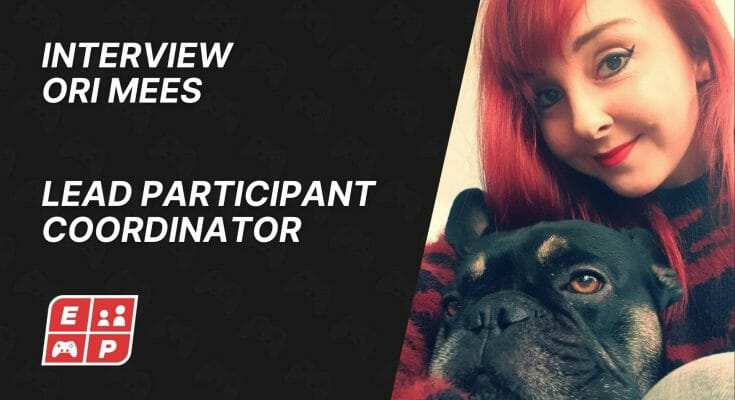 I got to know Ori Mees thanks to social networks and video game groups.

Today I want to talk to her because I think her journey can inspire children, teens and students who aspire to join the industry.

Hello Ori ! Could you please tell us what is your current profession?

Hello, I am the Lead Participant Coordinator at Player Research in Brighton.

We’re a playtesting company that helps developers to improve their games throughout development by getting feedback from people who enjoy similar types of games. We conduct playtests at our Montreal, Canada lab and Brighton, UK lab, as well as international remote playtests which players take part in from their own home.

And is this your first video game job?

This is my first role within the games industry, before this I had experience mostly in Finance.

I studied up to A Level in college; studying Film, Psychology and English Language. I made the decision to jump into the world of work instead of going to university.

Before working here, I never dreamed that I’d be considered for any roles or get the opportunity to work in the games industry, because I don’t have an undergraduate degree. I’m glad I was wrong about that!

I didn’t have any previous experience within the games industry before Player Research, but at a young age I moderated for an online virtual community for teens, where players could create their own avatar and interact with each other in the game world. I look back now and see that this gave me great experience with managing lots of players! When I was a bit older, I created games in my spare time for fun! I made interactive stories through letters sent in the post which involved puzzles and a trail of clues using real-life mediums (such as YouTube, email and Facebook) – these are also known as Alternate Reality Games. And most recently, a few years ago, I started to make a choice-based game for PC, Blake: The Visual Novel, which is being released on Steam in September.

My passion for games led me to discover Player Research; a playtesting company that pays rewards for trying out unreleased games and giving feedback. I playtested with them and absolutely loved it, then one day saw they were looking for a Participant Coordinator, and here I am now!

What does a typical day look like as a Lead Participant Coordinator at Player Research ?

At the beginning of a playtesting project, I work with the dev team and our researchers to define the playtesting audience for the game, based on what the developers are looking for and the kinds of games that are similar. My task is to find and schedule players with the skills and experience that best match that testing audience. To do this I call people who’ve signed up, to have a chat about the games and franchises they love as well as the ones they didn’t get on with and why. We carry out playtests for all age ranges so this can be talking to children and their parents, teenagers, or adults. I’ll hand-pick the best playtesters, then schedule them into research sessions to try a new game and give feedback.

I recommend getting children involved in playtests not only because it is a fun experience, but it also gives them a chance to practice giving constructive feedback— and they’re helping developers to improve their games.

I manage all comms between the playtester and Player Research which can include information to do with attendance, arranging rewards, signing NDAs or assisting with any set up issues.

What are the things you enjoy most about working in the industry?

It’s so exciting when a new, unreleased game project comes in as I get to see a pre-release version of the game. Being given the chance to talk to the developers – the people who’ve put so much time and effort into their projects – is really interesting for me. I love working in an industry full of passionate and mega creative people with a shared interest in telling a story and entertaining others.

What are the negatives when working in industry?

My company isn’t affected by crunch-time, but it is a very prevalent issue within the industry itself.

In terms of my role – or any role that involves being a third party to a studio’s creation – the biggest negative is not always being acknowledged in the credits for our work by companies that we work with. This doesn’t happen with every company but it can happen.

What advice would you give to students wishing to enter the industry?

If you have a creative passion for games, here are a few things I’d recommend trying out:

Finally, don’t fear failure – the only way to gain experience is by doing, and by doing you will experience times where things don’t go how you wanted or expected. With hindsight, you learn that a lot of what you thought was failing was actually a success in other ways.

What advice would you give to parents who want their children to play with moderation?

Positive reinforcement such as rewarding game time after tasks are completed (e.g. homework, tidying room) – even this itself could be gamified with a points system or reward chart if you really wanted to and encourages them to prioritise their schoolwork and home chores first!

Encourage children to play their games in a shared space (such as living room) so that you can see what kinds of games they are playing and gain some understanding of what they’re doing. This may also lead you into playing some games with your children too which is a great way to bond, and that leads me onto family game time. Games like ‘Knowledge is Power’, ‘Jackbox Party Pack Games’ and ‘That’s You!’ are great for encouraging a more open gaming atmosphere and getting everyone involved.

Do you have any other advice for parents who are new to video games?

Some of the things I would suggest for parents who are looking to either get into gaming themselves or familiarise themselves with the games their child is playing would be:

–    Understand terminology – Sometimes it can seem like a whole new language if you’re not familiar with any terms. Some terms are game specific, so if your child plays a lot of Roblox, for instance, you could search the internet for ‘Roblox terminology’ to learn more. Or ask your child what some of the words mean when they tell you about the game they are playing.

–     Websites such as Common Sense Media and Taming Gaming are helpful for parents who want to check game content and whether a specific game is age appropriate. Or you can search for a specific game and it’s recommended age range to gain information from different sources.

–    There are plenty of child-friendly co-operative games you could try with your child/children such as LEGO games, Overcooked, Stardew Valley, Fortnite, or Minecraft as well as the games I mentioned above for family time.

I play Stardew Valley with a friend when we’re both free. It’s a sweet and wholesome farming game, easy to pick up and play for a bit when you have some time available and you’re not looking for something too demanding. For children, I would recommend this game for ages 10+ due to the complexity of the farm management system, and you can play co-op with them!

I’m also playing ARK: Survival Evolved when I have some spare time. It’s a dinosaur-themed open world survival game. At the parent’s discretion, this game is appropriate for ages 10+, but there are dinosaurs some children may find scary, and the game contains violence; you have to kill dinosaurs in order to survive, which could be disturbing for some children. The game teaches organisational skills as you have to build and scavenge items to keep your character alive. If you play as a group, it also teaches delegation of roles.

Do you have any games to recommend for children? and for teenagers ?

I’d recommend 10 Second Ninja and Heave Ho for most ages.

10 Second Ninja is a fun little fast-paced game which will get your children puzzle-solving and great for getting used to game controls. It has replayability because you can push yourself to complete the level faster each time and it’s easily adaptable as a multiplayer game because you can take it in turns to beat each other’s time. Based on a google search and from my own experience, I would say this game is great for ages 5 and up.

Heave Ho is a hilarious party puzzle game. It teaches co-operation and communication between players. The game also includes a feature that makes it a bit easier if you are struggling. This is a child-friendly game, but some younger children may find it challenging.

If you play either of these games based on my recommendation, I hope you enjoy them!

Ori, on which social networks can we find you? Do you have any creations, sites to promote?

You can find me on Twitter – @Legend_Ori or LinkedIn.

I’d like to promote our Player Research Montreal sign up for local and remote playtests for all ages! You can sign up for the opportunity to take part in our playtests on this link.

Additionally, I’d like to mention my upcoming graphic novel inspired thriller, Blake: The Visual Novel which is being released on Steam in September. This game isn’t recommended for children due to violence and mature themes.

Ori, thank you very much for your time and your advice.

Former video game programmer, columnist for RDS Video Games, teacher, competitor ... Marc has always been very familiar with the world and industry of video games. He decided to help neophytes about it, to discover new universes, worlds and fantastic creatures.