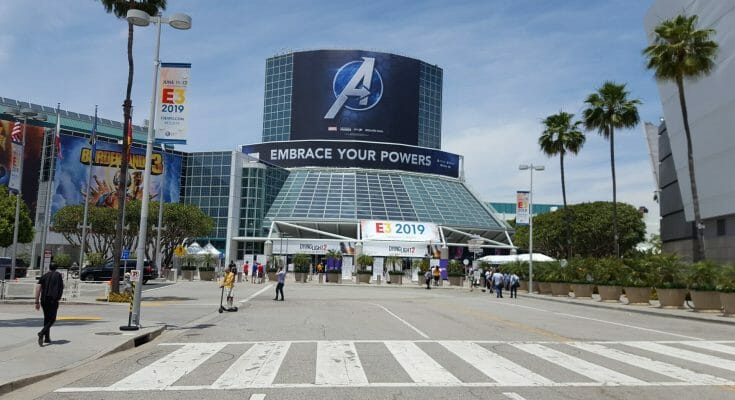 Every year it’s the same old story. I look forward to this event and my parents have already forgotten what it is all about.

What is a video game show? Imagine the book fair but we replace it with the upcoming video games.

Still don’t see? You see the auto show where manufacturers show us their car models in development, with new features, shapes, and their prototypes?

It’s the same, publishers exhibit their upcoming games mostly at the end of the year in this convention.

Convention means an event that takes up a great deal of space. For 20 years, E3 was held at the Convention Center in Los Angeles, California in the United States.

At this time, and for 3 days each year in summer, the Convention Center hosts stands with disproportionate dimensions and the colors of each publisher.

Who is this for?

Among the publishers, most of them have paraded over the years: starting with the platform manufacturers of course: SEGA, Sony, Nintendo, Microsoft but also Capcom, Bandai Namco, Konami, Bethesda, Activision Blizzard, EA ….

In short, this is the time when publishers organize themselves to show their catalog of end-of-year video games.

For this annual video game mass, all the media, industry professionals come together to cover the news and make many agreements between companies. Since 2017, the show is also open to the general public fan of video games. Each visitor must then pay about 300 US dollars to be able to pass through the doors of the Convention Center and see the novelties in person. Players then come en masse from the 4 corners of the planet.

In theory, it would be something beneficial, if each stand did not become crowded, and made it impassable to move in the aisles. At this point, it becomes difficult for the media and industry professionals to do business, chat, and make an appointment. The meetings then take place in private rooms of the convention center, or in hotel lobbies.

At GamesCom (European video game fair), or tokyo games show (Japanese show), some days are exclusively reserved for members of the industry and the media.

E3 is a show that has long been broadcast on the Internet on all major streaming video platforms.

Then there are the conferences of the biggest video game publishers who each speak between one and two hours. They announce their new consoles, their new accessories and the games they want to highlight.

Over the years, conferences have changed in tone and in which they are addressed. At first, they were intended for investors and holders of shares in its companies, they are now targeted primarily at hardworking players. 20 years ago, what was morally acceptable in speeches and communication is no longer necessarily acceptable, and the living room and the organization have evolved, not smoothly, as we go along.

We do not take the time to explain anything, for 3 days. Everyone involved in video games, from near or far, starts watching hundreds of video game trailers, or in other words, commercials. Publishers need to be aware of what the competition is doing. The media must report all announcements made to their readers. And players want to be aware of everything that’s going on, especially if a sequel to their favorite game is in development.

The living room is the center of attention during this time. Among the plethora of information that everyone takes, some games are necessarily neglected and have a hard time stand out enough.

Difficult to stand marble in the face of such a deluge of spectacle, the convention is made to capture attention and to sell. Sell lots of games. Draw attention to games that would not have been clicked off-event. And sell new models of consoles that we already have 2 times.

And I know, I’ve been at the event for 20 years, every year religiously. 20 years that I follow the couacs, the errors of communication, the different discussions, and debates around this. 20 years that I succumb to the purchase of the next games that looks cool.

E3 apart from its multiple mistakes over the years, is also a source of rejoicing, we anticipate the announcements, we speculate about the surprises and the titles that will be unveiled. All topics are debated in the player communities.

So necessarily with the COVID-19 virus pandemic in the year 2020 (I write this for people of the future who will read my article), the events that gathered so many people in one place have been canceled.

Basically it is a website, on which visitors can view the conferences, trailers and see the details of the games announced.

Less spectacular necessarily but still a good way to attract and capture attention, and ultimately, to sell.