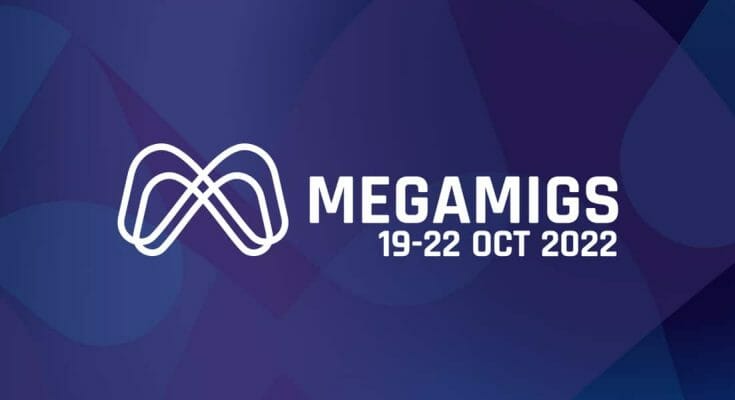 MEGAMIGS is now an annual event dedicated to bringing together all video game fans whether you are gamers or industry professionals. It is organized by La Guilde du jeu vidéo du Québec and Kaliko Productions.

The next edition takes place from October 19 to 22, 2022 at the Bonaventure Hotel in Montreal, Quebec, Canada ! The website and details of the convention are here.

The MEGA, for Montreal Expo Gaming Arcade, was an annual public event that offered video game developers the selves the 15th anniversary to show their latest productions to all players, young and old.

Migs, for Montreal International Game Summit, was an event dedicated to professionals in the video game industry, to gather, discuss, and eventually do business together. Surprisingly, professionals have few opportunities to meet if they don’t already know each other.

When video game fans and industry professionals travel the world to go to the MEGA in Montreal, and they have to make the trip for the MIGS a second time that takes place a few months later, it becomes difficult to justify.

Hence the idea of bringing the two events together into one. The general public can consult the recent video games of Quebec and Canadian developers, and video game professionals have an opportunity to do business networking, while consulting the news of recent productions.

It was therefore a convention where everyone can observe and head to the stands of game developers and publishers. They can then play the games presented.

Lectures are held throughout the week on multiple topics. The event is really aimed at anyone interested in video games.

All the details of the 2022 edition are here.

“At the18th edition of MEGAMIGS by La Guilde du jeu vidéo du Québec, the thousands of visitors expected will be able to have fun for the first time and for free with several new games. From October 19 to 22, the event will mark the return of its formula in person, at the Bonaventure Hotel in Montreal. October 21 and 22 will be reserved for the general public, both novices and curious as well as enthusiasts.

The Primeur Zone will allow them to try several expected games before their release. Upon signature of a discharge and delivery of cell phone at the entrance, the lucky ones will be able to discover:

Another must-see premiere, at the Gearbox Québec booth, players will be able to discover New Tales from the Borderlands, released on October 21st!

Other premieres and novelties

As for the Indie Zone presented by Ubisoft, it will showcase the creativity, talent and achievements of 10 independent studios from here and abroad, as well as their star games:

Each has less than 20 people. Some even work solo. Many will offer exclusive content, while others will unveil their first games. A special presentation highlighting all the games in the Indie Zone will take place on the Discovery Scene. This will be followed by a game session and short interviews with the developers. Meet them in the Expo Hall, where you can also test their demos. Retro, horror, exploration, role-playing, adventure and sci-fi games are waiting for you!

It is also at this place that will be gathered about sixty exhibitors, especially studios. There will also be the Education Zone. Seven schools and institutions of higher education (colleges and universities) will present their programs of study in video games and the multiple professional avenues in this industry. In addition, it will be possible to exchange with current students and ask them questions about their own experiences.

A job fair will help potential industry recruits who want to improve their portfolio or resume. They will also be able to simply consult the multiple job postings.

Games in all forms

In addition to the many discoveries and encounters, the general public component of MEGAMIGS of La Guilde du jeu vidéo du Québec will include a host of fun activities for families and groups of friends:

Several personalities from the gaming world and other fields will enhance the event with their presence. Here are some of them:

Phil has always been immersed in video games. He loves collecting consoles as much as he does exploring new games. A spokesperson for MEGAMIGS for three years now, Phil will feed his social networks with studio visits, interviews, game discoveries and contests between now and the event, and will be present on October 22 to discover the games present with the public. He will also host the MEGAMIGS Awards on Saturday, October 22 at 5 p.m.

Singer, pianist, flutist and fiery singer-songwriter Andy St-Louis will participate in mainstream content on October 21 at 3 p.m. before offering a live musical performance at 5 p.m. You will probably recognize your favorite video game melody!

Streamer and web content creator since 2015, Valérie loves video games, Japanese anime, manga, alternative fashion, geek pop culture and new technologies. She will be present at the event to meet her community, in addition to hosting a panel on her atypical gamer career on October 21 at 4 pm.

This content creator is best known on YouTube for his gaming videos and authenticity. Also, he discovers his life in vlogs where he meets interesting people who share their passions. He will be on site all day on October 22nd. At 1 p.m., he will meet with representatives of 10 independent studios for 90 minutes.

This indie game developer and Twitch streamer hosts a daily stream of game development, sharing the process of creating her own. She will present on October 20 at 11am live broadcast.

Finally, the MEGA Party presented by Red Barrels will take place on October 22 to close MEGAMIGS by La Guilde du jeu vidéo du Québec. From 8pm, bites, drinks, atmosphere and activities around Halloween and horror will be part of the party!

To live a unique adventure in the heart of the dynamic and innovative world of video games, get your tickets at megamigs.com/fr/billetterie.”

“From October 19 to 22, the18th edition of the MEGAMIGS of La Guilde du jeu vidéo du Québec will allow 3,000 video game professionals to reconnect and exchange in person for the first time in three years.

This annual event organized by La Guilde du jeu vidéo du Québec and produced by Kaliko Productions will take place in a more unifying format than ever, at the Bonaventure Hotel in Montreal. The country’s flagship video game event, it will offer participants four full days to:

• network and carry out business networking;

• deepen their knowledge in several current areas of the video game industry.

“MEGAMIGS’ programming covers topics of interest and reflects La Guilde’s committed position on diversity, equity and inclusion (DEI) issues,” said its Executive Director, Jean-Jacques Hermans. In connection with industry-wide concerns, MEGAMIGS will therefore offer conferences such as Working on the Spectrum, Mother Resilience in the Global Gaming Industry, Getting Back on Your Feet After Problems at Work, Women and Games in IT.

“Encouraging such spaces for exchange, openness and learning is one of The Guild’s objectives through its support of promising initiatives,” continues the leader. It will present the new Award of Excellence in DEI to an independent studio that has distinguished itself through its internal practices and processes. »

MEGAMIGS 2022 will also be a unique opportunity to hear in one place from several recognized experts on topics that are important to the entire industry. Confirmed speakers and topics covered include:

• TQ Jefferson, CEO, Product, Survios – The State of the Situation in Virtual Reality

• Rebekah Saltsman, CEO and co-founder of Finji – A look back at the launch of The Tunic Game

In addition, a panel on acquisitions will include Trent Oster, CEO of Beamdog, Julian Maroda, Creative CEO of Norsfell, and Johan Eile, CEO of Kabam Games. The discussion will be moderated by Shum Singh, Managing Director of Agnitio Capital.

To celebrate the return of its 100% in-person formula, MEGAMIGS will offer four summits for the first time (all followed by a networking activity). They will include conferences, workshops, studies and other stimulating activities around major issues: Academia/research and development; Audio; Communications and marketing; and Independent studios, publishing and investments.

A networking event presented by InnoProfits, Ubisoft and UQAT-CNM will also allow exhibitors and business participants to forge links on October 19 and 20. As for the Education Zone presented by Synthèse, it will bring together a dozen schools and educational institutions that will make known their regular and continuing training programs.

No less than 80 global and national brands will be present, including Red Barrels, SandBox Games, EA Motive, Ubisoft, WB Games, Gearbox, Timi Studio Group, Beenox and Triple Boris. WB Games and Gearbox will highlight their respective novelties, Gotham Knights and New Tales from the Borderlands. In addition, in the Indie Zone, presented by Ubisoft, the Discovery Scene will put the spotlight on 10 games designed by as many independent studios. This special presentation will be followed by demonstrations and short interviews with the developers. It will be possible to test their demos. Retro, horror, exploration, role-playing, adventure and sci-fi games await you.

The best will be honored

As a closing event, nine MEGAMIGS Prizes will be awarded for the 3e year to local studios and creators in categories like Best Game Design, Best Direction and Artistic Achievement as well as Better technological innovation. Presented by WB Games, the ceremony will be led by radio host and MEGAMIGS spokesperson Phil Branch. It will also be awarded prizes from the Best Places to Work Canada competition, organized by GamesIndustry.biz.

Tickets for MEGAMIGS 2022 are offered in four categories:

To live a unique adventure in the heart of the dynamic and innovative world of video games, get your tickets at megamigs.com/fr/billetterie.”