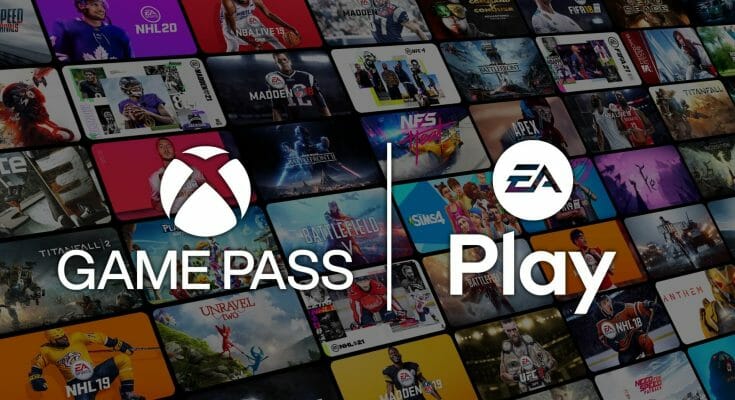 Xbox Game Pass is a subscription offer created by Xbox (the video game arm of Microsoft).

When users subscribe to this subscription, they can access several hundred video games on their Xbox consoles or also on PC, mobile phone or Samsung smart TVs.

The subscription is very similar to Netflix’s for TV shows and movies, and Xbox has never hidden it. Xbox wants to offer the Netflix of video games through Xbox Game Pass and gives it the means to do so.

As such, all exclusive video games produced by Microsoft Game Studios are available on the day of their launch on Xbox Game Pass.

Many games from third-party publishers are also available sometimes when they are released, sometimes later.

Just like on Netflix, the catalog is constantly changing, many titles are added every month, and are often of excellent quality and popular. On the other hand, some games leave the catalog after the end of their contract with Xbox.

Naturally, when you unsubscribe, you lose access to the games. However, if you resubscribe some time later, your backups and progress will be kept and you can pick up where you left off, regardless of the device. Undeniable comfort.

For developers and publishers, it is a whole calculation of visibility, sales, promotion that opens up to them with an offer different from the usual distribution channels.

EA (formerly Electronic Arts) is an American game publisher and developer best known for its range of sports games (FIFA, NHL, Madden NFL…), Star Wars games, Need for Speed racing games and its military shooters (Battlefield). You can play their games in some of the offers below.

Riot Games is an American game publisher and developer best known for its League of Legends games. Team Fight Tactics and Valorant. These are very popular games but above all free for all originally.

In their free versions, they constantly ask players for money to buy characters and costumes for the characters, or to play for hundreds or thousands of hours.

In their Xbox Game Pass versions, everything is unlocked and accessible from the start, and therefore allows you to play at a lower cost as long as you pay the subscription.

For now, the majority of Riot Games games are available on desktop or mobile.

You can play their games in some of the offers below.

This is the basic Xbox package, available since the launch of the Xbox brand in 2002 on the first Xbox. It allows you to play paid games online on Xbox consoles.

Each month, 2 games are offered for subscribers, but this offer has deteriorated in 20 years and the games offered are of poor quality in general, in favor of the packages below. The games offered change each month and are available as long as you add them to your account and pay for the subscription.

Provides access to the Xbox Game Pass catalog on your Xbox consoles.

Please note that you will not be able to play the online mode of games with this package. You’ll need an extra Xbox Live Gold membership (which doubles the bill), or just give in for Xbox Game Pass Ultimate below.

There is no need to pay to play online on PC computer.

Includes the benefits of all the above offers.

Provides access to the Riot Games catalog on your Windows computers.

Allows you to play paid games online on all devices.

By far, the best solution, but also the most expensive.

How to play it?

Xbox Game Pass is available on the following devices:

It’s possible to play controllers from competing consoles on Xbox Game Pass, but compatibility is much better and increased with Xbox One or Xbox Series controllers. In addition, you are sure that it works with all the games available in the catalog and that you have all the buttons and functions of the controller.

On TVs, it is also possible to connect your Xbox controller via USB or Bluetooth.

For Netflix, it’s simple to view a movie, they send movie data to every user on their device for streaming, and it’s the same movie for everyone.

For video games, this is a huge problem. Indeed, when playing a video game, the computer or console must constantly recalculate the images displayed on the screen, the interactions, the sounds, according to the buttons pressed by the players. Each part is therefore different for each user.

So for many years, gamers thought that “streaming” games, that is to say downloading the images and sounds of a game played on a remote computer, would be impossible. And it was. This caused many delay issues when pressing buttons and displaying the result on the screen, or video compression artifacts during games.

Now, the technologies have become reliable enough to allow totally suitable parts, especially for the general public. It’s not perfect yet, of course, and the most avid gamers prefer to play with the game files on their hard drive or CD.

On Xbox Game Pass, you can download games to your Xbox or to your computer. This is the best solution technically. It takes a few minutes or hours (depending on your connection) to download the games on your devices upstream however. However, this requires a computer with good graphics and performance capabilities (ideally a gaming computer, dedicated to gaming), or an Xbox. You also need an SSD with good storage capacities because accumulating games on it will take up a lot of space.

Instead of downloading the games to the device, we download the images and sound from a remote computer that plays the game. So you need an excellent internet connection to play this way (minimum 50 Mbps download, I recommend 100 Mbps). On the other hand, you can then play on the device of your choice. And it’s very likely that the phone you have in your pocket is already compatible.

So you can play Halo Infinite or Forza Horizon on the subway, on the train, in your hotel room without devices other than your phone or laptop.

So there is a small delay when pressing the buttons, and sometimes there are image compression artifacts that intervene. We therefore advise against playing the action and rhythm games above.

Careful! When streaming, you can only play one player per device. Even for local multiplayer games like Moving Out, Overcooked, Halo Master Chief Collection or Dragon Ball FighterZ.

In addition, you can only play the controller on either console or PC, even for games that support keyboard and mouse like Halo Infinite.

There are many, many games that are constantly being released. For the media, Xbox Game Pass is a great tool. Indeed, for each game you want to test, you have to contact the publisher, find the right interlocutor, the right marketing company that takes care of giving keys to the media. These keys allow us to test the game for free and give you our impressions.

With Xbox Game Pass, this allows us to access, test, and review games without asking permission from the publisher, without having to convince them. In addition, when you take the key, there is a tacit agreement, that you have to publish articles within a reasonable time. The publisher wants to promote its game at the time of its release in general.

With Xbox Game Pass, we can look back at the major titles released in the previous months and cover them on our site.

Should we fall for Xbox Game Pass?

Xbox Game Pass Ultimate is clearly the best offer among those offered, to enjoy the catalog of games. This comes down to about $ 20 per month (taking into account Quebec taxes in the price) to play what you want. It is quite expensive. You must also include the price of an Xbox controller, or a mobile controller compatible with the Xbox app.

Xbox gamers clearly benefit a lot. Instead of buying games regularly, we consume what we want, we test, we peck, and we change games much more easily, and quickly. And it’s cheaper if you’re used to buying more than 6 games (full price) per year.

If you don’t want to make choices in video game stores, and just enjoy the catalog, every month this is a great choice.

However, if you consume few games, or are new to gaming, it may not be the ideal choice to pay $20 per month. This is very good to test and discover many creations, but do not forget to cancel the subscription in this case.

Note that it is possible to buy 3-month maps of Xbox Game Pass to save a little, but not more unfortunately.

Be careful that if you only play free download games like Fortnite, Call of Duty Warzone, Rocket League, Paladins or Overwatch 2, you don’t need any of these offers.

My advice, look at the current Xbox Game Pass catalog :

If there are at least 5 games you want to play, test, try the experience!