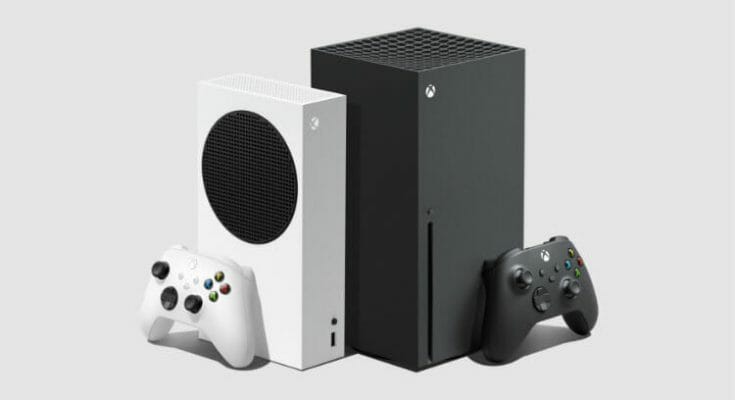 The 2 models (S and X) can download the games purchased from the Microsoft Store (the equivalent of the App Store or Google Play) to store them on the console’s hard drive. So this is the only way to play video games on the S model of the console.

It has a 1 TB hard drive type SSD (Solid State Drive). It’s much faster than the Xbox One’s HDD hard drive (Hard Disk Drive). However only 800 GB are usable from this SSD hard drive on 1 TB.

Microsoft’s Xbox Series there are many exclusive games that have been released or are in development like:

However, the “Xbox Series” exclusives are also available on PC, on Windows 10, from the Microsoft Store. Exclusives are only valid compared to other consoles.

In addition to blockbuster games from third-party publishers but also available on PC and Playstation like:

You must subscribe to the Xbox Live Gold service to play online games. It costs 70 CAD per year. Each month subscribers to the service can download (or add to the library of games on your account, if you do not want to download them) between 2 and 4 different games. You can find them in this article.

These games, offered with Xbox Live Gold, are playable as long as you are subscribed to the service. You can’t download games from the last few months.

So many techniques to keep the subscription as long as possible.

If you play a free online game like Fornite or Call of Duty: Warzone you don’t need an Xbox Live Gold membership.

Xbox Game Pass is another subscription-based service. For 12 CAD per month, you have access to many Xbox Series games (but also from the 3 older generations of Xbox: Xbox One, Xbox 360, Xbox original) that you can download and play as much as you want… as long as you pay for the subscription.

Note that some Xbox Game Pass games are playable via streaming on smartphones, or Windows 10 PCs. That is, instead of downloading them to your console, the games will be launched on a console or computer in a Microsoft data center/data center, and the video of your game will be sent to your device.

This technique of streaming play is only viable if you have a very good internet connection. Indeed, Microsoft’s servers then send you 30 or 60 frames per second on your console, and the Internet connection must be able to receive such a video rate. We recommend a minimum of 100 Mbits for download.

To play Xbox Game Pass games online, you must also be a Playstation Plus subscriber. Yes that’s 2 different subscriptions.

Fortunately, Microsoft has directly simplified its offer by offering a subscription gathering everything for $ 16 per month.

If the price is quite expensive, it is especially because the offer of games offered on the Xbox Game Pass is incomparable. This includes a very large selection of very high quality games. New Microsoft exclusives are directly available and downloadable when they are released for subscribers at no additional cost.

If you have a Microsoft machine, you can just play the games in this subscription, there is something to do for years. No need to buy games.

There are many apps that can be used on Xbox Series:

Whatever your favorite video-on-demand system, or music-on-demand, you’ll be able to watch or listen to it on Xbox Series.

Personally, I prefer to use the Xbox Series for YouTube for example because the controls on the controller, react better than the remote control of my Smart TV. The Xbox Series is also faster.

It is also possible to share its parts directly on streaming platforms like Twitch, or YouTube. So your game can be seen by everyone on the Internet. You’ll need a microphone and a computer camera to film yourself playing like other streamers on Twitch and YouTube.

Fortunately no need for proprietary equipment.

Otherwise it is just possible to take screenshots of your game, or video clips of your games and not share them, or share them with a small audience.

The Xbox Series is backwards compatible with all previous Xboxes, but not with all games.

All Xbox One games are compatible on Xbox Series but not all Xbox 360 and Xbox (original) games.

Check out this article to find out which games from previous Xboxes are compatible.

Backward compatibility means that you will be able to play the games you have on your Xbox discs (original), Xbox 360, Xbox One, on your new Xbox Series X console (if it has a disc drive).

Same for games downloaded from the Microsoft Store, if you see it on the store, you can play it, even if it is more than 20 years old.

It is also possible to transfer all your data from your Xbox One to the Xbox Series. All? almost! If the size of the hard drive is the same on the box of the console (1 TB), in practice the Xbox Series only allows use 800 GB of internal memory to its users. It may not be necessary to transfer everything then to the new console.

When the transfer is made… your Xbox One no longer has much use, indeed the games are all compatible on Xbox Series and the new console is faster, more efficient.

Should I buy an Xbox Series console?

The console is very expensive at the moment, about 600, 700 CAD plus taxes. Add to that a second controller, a game, a subscription to play online. And you very quickly get to the 1000 CAD of expenses to play video games.

Despite the exorbitant price, the console has been out of stock since its release. The fault has a very large demand from customers, and a shortage of high-performance computer components for more than a year.

The Xbox Series X is an excellent console with games of very high quality, but for now it is a luxury product for those who manage to get it.

Fortunately the Xbox Series S is a cheaper product, and more often available. This console model, however, is less versatile.