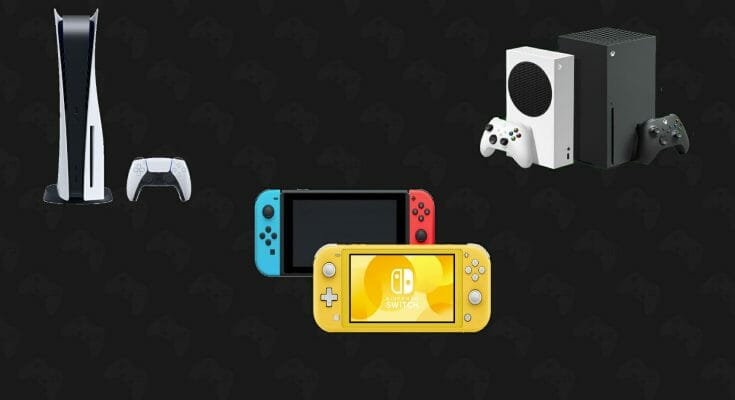 When I am asked the following question: “Which console is the best?”, my answer is this: “It depends on your tastes and the games you want”.

The Playstation 5 is made by Sony, and they have over 25 years of experience in this industry.

The Nintendo Switch is made by… They and Nintendo have more than 40 years of industry experience.

And the Xbox Series is made by Microsoft and they landed in 2002, 18 years of experience.

All three consoles are excellent choices and of excellent quality. Whatever your decision, you won’t get bored with it. There are games for everyone.

The budget also determines your choice, the Switch is clearly the cheapest especially in portable version only, while the Playstation 5 and Xbox Series are very expensive devices.

It is also possible that it is very difficult to find the consoles in store during the end of the year holidays! Indeed, the global shortage of computer components penalizes all industries, including those of video games. It’s been a year since the Playstation 5 and Xbox Series are constantly out of stock. People snatch them on sites like Kijiji or Ebay and prices go up well above the recommended price.

To get them, you will have to spy on the Twitter and Discord accounts of computer robots that track the stocks of consoles in stores.

Since the Nintendo Switch uses more common computer components, it will also be more common in stores and under Christmas trees.

However, it is very possible to wait until after Christmas, when stocks eventually return to normal. Nothing is guaranteed, and no one knows when the components will be available again in large numbers.

The Playstation 5 and Xbox Series are computers truly dedicated to entertainment (Warning: you won’t be able to install your computer apps on them). Both consoles are very powerful, and you’ll be able to view your Netflix, Disney, Amazon Prime Video, YouTube on them, plus thousands of games. With all the applications cited, they can act as a media center.

Both can make games, movies in 4k, ie a very high resolution to display many details.

Their network capabilities are also the best, you can play without problems on the Internet with your friends or strangers and even chat online with them simultaneously.

You can buy either the boxed games, physically, and they will be Blu-Ray discs, or the games digitally on the virtual store of each manufacturer. In the second case, the games will be downloaded to the console’s hard drive.

That said, even when you have a Blu-Ray disc in the game, you may need to install the game on the console’s hard drive to speed up loading times.

The Playstation 5 (2 models: $630 and $500 without a Blu-ray player) has exclusive games like God Of War, Ratchet and Clank, Spiderman, Horizon Zero Dawn, Persona 5, Wipeout….

The majority of the exclusive games will be Japanese because Sony is located in Japan and has better relations with its neighbors than Microsoft.

The Xbox Series (2 models: $600 and $380 without Blu-ray player and reduced performance) is the opposite, it has exclusive games like Forza Horizon/Motorsport, Halo Infinite, Gears of War, Fallout, Doom, Roblox…

A large majority of exclusive games made in the West therefore, because Microsoft is a company based in the United States.

There are so many functions on these 2 consoles and possibilities that it sometimes gives mixed interfaces.

The problem is that during the holiday season, following the pandemic that has slowed console production in China, there will be no Xbox Series and Playstation 5 in stores. Only very limited pre-orders will be honored.

That leaves room for the Nintendo Switch.

The Nintendo Switch is a hybrid console that can be played by being plugged into the TV or by breaking away and playing in portable mode: like a GameBoy or a Nintendo DS wholesale.

There is also a model of this exclusively portable console: the Nintendo Switch Lite.

The Nintendo Switch is a console released in 2017, and has always been much less efficient than these competitors. But that’s not Nintendo’s concern.

The library is clearly oriented family and children, but there is also something to enjoy for adults with many games dedicated: Wolfenstein, Mortal Kombat, Bioshock, LA Noire …

It is possible to play on the Internet with the different models of Nintendo Switch but the performance is clearly below the competition.

Games can be purchased physically in a box that contains a cartridge. Or digitally, on Nintendo’s virtual store available in the console.

The console is cheaper than the competition (2 models: $400 and $260 in model only portable) but accessories make the console very expensive.

Note that if you want to play Fortnite, Brawlhalla, or Minecraft, they are available on all consoles.

Other games also come out on the 3 consoles. Or on the 2 most powerful consoles (Playstation 5 and Xbox Series) in the case of the biggest productions.

The 3 consoles now require an annual subscription to play online in each game.

$70 per year for the Playstation 5 and Xbox Series. Each offers 2 downloadable and playable games for free per month as long as you subscribe.

$25 a year for the Nintendo Switch, but online services are the bare minimum.

The 3 consoles have parental controls to limit which games can be played by children (to avoid violent games for example), and the duration of their games.

But you’ll have to be a little patient to get your hands on it.

Wondering why I didn’t mention the Playstation 4 and Xbox One?

Well, simply because they are coming to the end of their lives. They were released in 2013, and the Playstation 5 can play Playstation 4 games, and the Xbox Series can play Xbox One games.

They will become obsolete very soon. You can enjoy the huge ludotheques released for 7 years at low prices that said.

Just know that this is not going to last though.