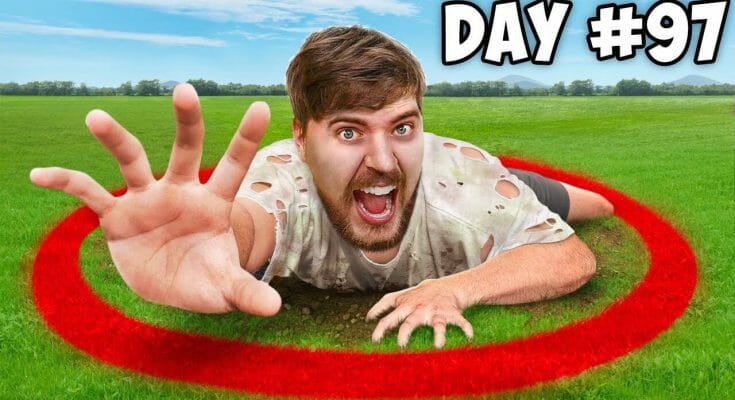 Jimmy Donalson, better known as MrBeast, is an American videographer who publishes his videos on YouTube. It was born in 1998 and has reached 100 million subscribers on the video-on-demand platform. If your child is old enough to look at him, it is very likely that he already knows him.

When Jimmy was a teenager, he started his YouTube channel in 2012, like many people his age, posting many videos of his Minecraft , Pokémon and Call of Duty games he played with his friends, as well as content where he expressed his thoughts.

When he was bored, he would complete such challenges in front of his camera:

By iterating, on thumbnails, titles, the content of his videos, he made his channel, more and more popular. He also found a type of video that worked better than the rest because it was different from other channels: philanthropy.

He started distributing the money he earned from YouTube advertising to random people. Strangers on the street? “Here’s $1000!”

He doesn’t like one of the cars that stop to greet him? He offers the driver a brand new car in exchange for the old one, if the driver agrees that one of MrBeast’s acolytes destroys the old car with a bulldozer.

In his videos, MrBeast is constantly surrounded by his friends, young men (only) his age who follow him everywhere.

Because that’s the problem: in order not to tire his viewers Jimmy must constantly renew himself with each video. Acts of philanthropy are no longer enough on their own: it is necessary to adopt all the dogs in a kennel, buy a burger restaurant, distribute the sandwiches to thousands of people and turn it into a franchise, buy everything merchandise from a GameStop or Walmart and distribute it to everyone.

As you have understood, this is an escalation in excess.

If at first, Jimmy made his friends do multiple challenges to give them larger and larger sums of money, it has shifted more to strangers or subscribers to his YouTube channel. when he made a video inspired by the hit Korean series of Netflix: Squid Game.

As a reminder, Squid Game is a fiction that features candidates forced to participate in a gigantic game show to win a lot of money or… die, a bit like the Hunger Games or Battle Royale movie series.

If Jimmy’s version does not kill people and remains joyful, it remains an additional test for him to see what people are able to do to obey him and try to win mind-boggling amounts of money. With more than 289 million views, his Squid Game is his record to date.

What to do when you have become a multimillionaire, when you no longer need to work for the rest of your life? We try to beat our own record!

Putting yourself in danger for money

So more and more MrBeast videos include increasingly stupid and dangerous challenges. Stay on site for a certain number of hours, days in water , or in ice , or in a slimy substance , lock yourself in a coffin for 50 hours, do not eat for 14 days .

Everyone goes there, his friends, his subscribers, his family, the family of his friends, strangers, and himself.

In many cases, this sounds like torture: forcing someone to stay in a house without leaving their home for 100 days to earn them $500,000 is hardly acceptable. In addition, Jimmy does not stop lying and changing the rules during the game. Suddenly, he will destroy the furniture, remove the occupations of the victim, tear off part of the house with a backhoe, leaving its occupant in the cold during the night, bring an army of people disguised as clowns to stare at the occupier, put huge speakers to produce a lot of sound and discourage the occupant and prevent him from sleeping…

If I write this article, it’s because I want parents to be aware of what children can watch. If some children can tell themselves that they can reproduce the model of MrBeast because it represents a young person and far from the parental figure, there are many things that are wrong in this case.

I hope that the discussion can be opened with children on these topics:

Talk with your children about the multiple acts involved and ask them if they are acceptable.