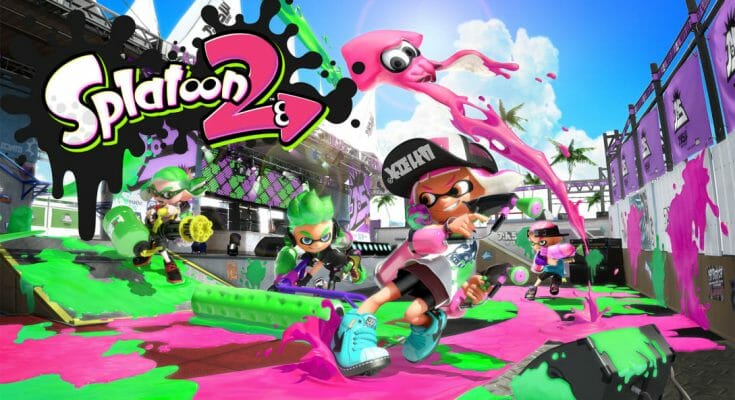 Splatoon 2 features children who can transform into squid called Inklings who battle arenas with colored ink shots. When in the form of squid, they can pass through the colored ink faster and hide. You play as a third-person Inkling and face enemies in various levels. The games are similar to paintball games.

Inklings characters shoot themselves with paint guns, paint rollers, ink bombs, ink rocket launchers and other gadgets creating ink/paint explosions. They attack similar characters and tentacles of enemies, and huge bosses. Some weapons may look like real weapons by far, but everything is being done to mitigate this and the very cartoon environment contributes to this.

Requires reading for years. Adventure mode and menus have a lot of text.

An extension can be purchased to play a new story. More details below.

Requires knowing how to move in a 3D environment by moving the camera.

You don’t have to have played Splatoon 1 to enjoy this game.

Splatoon 2 features children who can transform into squid called Inklings who battle arenas with colored ink shots. When in the form of squid, they can pass through the colored ink faster and hide. You play as a third-person Inkling and face enemies in various levels. The games are similar to paintball games.

Players can customize their own characters by choosing their hats, sweaters/t-shirts, shoes, and weapons.

A story mode for a single player that lasts several hours.

This mode offers to take on players who have the game and a Nintendo Switch console near you. So each player plays on his console in local WiFi.

Players can either fight a private arena battle (from 2 to 8 players) or a Salmon Run (2 to 4 players) in cooperation.

You can play 1 player per console.

Regular Battle: The classic Splatoon confrontation mode: Turf War, in this mode the arena must be painted as much as possible so that its color is most present at the end of the 3 minutes of the match.

League Battle: Play with 1 or 3 friends (if you have 2 online friends at this time, it won’t work) online against opponents.

Salmon Battle: A cooperative mode with 3 other online players where we face hordes of monsters that arrive in successive waves.

Every 2 hours a zone/arena rotation, where players compete, takes place. At this point, the player is interrupted by the characters presenting the news in the game, who explain what are the new arenas today. An interruption that breaks the rhythm and that we could have done without.

Every few months, there are themed events (ketchup or mayonnaise for example, or Mushroom or Star of Mario) where players join the team of one or the other of the presenters for a weekend/weekend. At this time, all the matches made and won, allows the presenter to earn points. At the end of the weekend, the team with the most points receives rewards.

A paid extension that adds a dedicated story mode of 80 levels can be purchased separately. If you enjoyed the original story mode and want more challenges, this extension is for you.

Completing this extension unlocks the ability to play with children/octopus (octoling) instead of children/squid (inkling).

Splatoon 2 is a great game with a lot of content. However, it will require dexterity to overcome all obstacles and to be able to survive against opponents in line.

We recommend it without a problem.