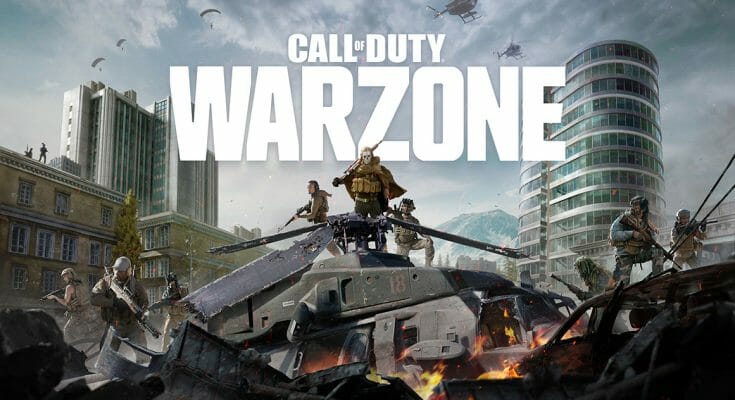 Welcome to Verdansk, soldier! In this free game of the Call of Duty universe you will take control of a parachuted soldier into a huge world with the sole objective of being the last survivor. Use the arsenal of weapons and equipment from Call of Duty games to defeat your opponents in this frenetic, fast and error-free game.

Warzone is a competitive and fast-paced game that requires a lot of reflexes. Without necessarily being the most difficult game, the game is not easy to learn for a neophyte.

Presence of violence, gore and blood. The characters shoot themselves with guns, knives, grenades. Sounds of realistic shots, pain and explosions. Remote or hand-to-hand combat. The characters utter insults and sacres frequently, if not constantly. Players play as various soldiers and fighters inspired by the contemporary world.

As mentioned earlier, the game’s vocabulary may prove inappropriate for younger people, since it addresses mature themes.

The content of Call of Duty Warzone glorifies the armed forces, war and everything related to this sphere of society. The game represents a variety of characters with great ethnic and physical diversity. The game encourages teamwork.

It is possible to buy additional content, such as costumes, characters, different appearances for weapons. The player is constantly asked to buy these cosmetic items with money.

Each season, the game launches new characters and new appearances that must be unlocked with real money. This content does not affect the game experience directly, since objects related to the gameplay of the game are unlockable by playing normally.

The player character can use weapons, abilities and different gadgets. The player must master several commands and he must know the game well to defeat the opponents. The fights in Call of Duty Warzone are fast and require the player to adapt. All buttons on the joysticks are used. Playing the game requires good hand-eye coordination and good reflexes.

The game is free and can be downloaded to all game consoles and computers.

Call of Duty Warzone is the free battle royale version of the long series of Call of Duty. Originally launched in 2020 during the high period of Call of Duty Modern Warfare (2019), Warzone at the time used the weapons and equipment accessible in the game. In 2021, the weapons of the new Call of Duty, Call of Duty Black Ops Cold War were added to the Warzone game mode. It is expected that the game will continue to work this way for a long time.

Call of Duty Warzone is a battle royale-style game. At the beginning of a game, nearly one hundred players are parachuted by plane into a huge world and must quickly find weapons, armor and equipment to be able to defeat opponents. To win, you have to be the last survivor in the game.

Warzone adds to the traditional formula the ability to create classes with the player’s favorite weapons and equipment and get them during the game. In addition, the game adds the concept of the gulag, a place where players who die during the game can get the chance to come back to life by winning a duel against another player.

Call of Duty Warzone is played exclusively online. There is no feature to share the screen. One player per console.

When the player plays for the first time, he can participate in a single-player mission that teaches him the controls and how the game works. The rest of the game is entirely online.

The player teams up with one or two other players and is thrown into a large arena. Players must find equipment and face opponents to try to be the last survivors in the arena, as the combat zone decreases minute by minute.

In this mode, players have to find money by killing players and digging into the environment. The first team that raises a million dollars wins the game.

There is always a rotation of game modes in Warzone, in addition to the two main modes. These modes modify the rules of the game, the available weapons and several criteria in this way to create a variety of fun modes to try. These modes are often only available for a few months, before being replaced by others.

Call of Duty Warzone is a frenetic, fast and intoxicating game for those who want to invest their time. For new players, the learning bar is high, since the best weapons will take time to unlock. In addition, the game has a rather rigid metagame (that is, what the community considers the best strategies to adopt in the game). In 2021, Warzone is also suffering from an epidemic of hackers and cheaters that can make the experience less enjoyable at times.

More information about the game: Official page of the game on the Call of Duty website