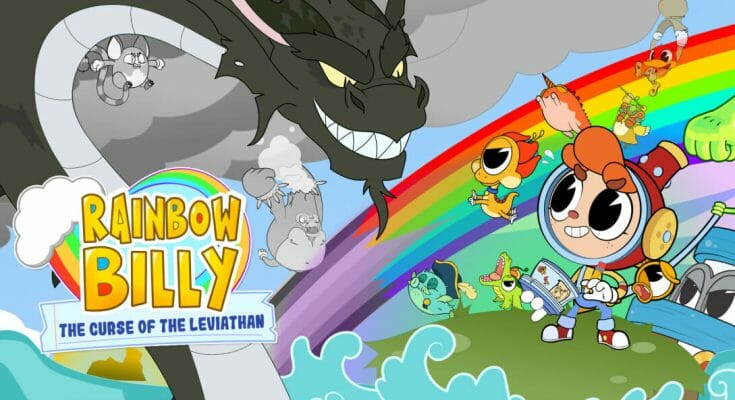 Rainbow Billy is a role-playing game that emphasizes friendship and compassion. The game begins with a disaster that falls on the world of the imaginary and takes away the world’s colors. Billy will go on a quest to restore his world to its former colors. Along the way, he will come across characters with different characters. He will have to show empathy and patience to have his enemies on his side.

The player is very well guided in his progression. The beginning shows very well how the game will unfold increase in difficulty as the player progresses in his quest.

There is a lot of text, but the language is very familiar.

This game relies a lot on friendship and understanding of others. Every enemy Billy encounters he seeks to make him his friend. The world of Rainbow Billy has created all different characters with unique problems for each. In order to progress, the enemies encountered in the game will have all their problems. They will be angry, anxious, depressed, etc. In addition, each fight has something unique, a little special touch for each of the enemies. The main character will therefore have to reassure and encourage them in a positive way. Which will bring the color back into the world.

There is a lot of text. Elicits a secondary 1 reading level.

The game does not require any additional DLC or purchase.

A certain reflex and dexterity is required in order to advance in the game.

Rainbow Billy is a game that is set in the imaginary world. All seem to be preparing for a big party, with fireworks of all colors, when the Leviathan arrives to steal them. The world is immediately covered in black and white. Billy flees with the help of his ship friend and soon finds a friend, Rodrigo. It is a fishing rod with a hand that speaks a lot. He will help Billy overcome many obstacles and understand the problems of his enemies.

Billy will have to find the colors of his world, through compassion and understanding. In order to progress, he will have to learn to put himself in the place of his enemies to eventually make them his friends. The creatures encountered will be turned upside down by this and will be accepted by Billy, despite the problems they are experiencing. The game has a visual style reminiscent of the Paper Mario series. It has a 3D world, but the characters are in 2D.

The mode of operation in order to fight his enemies will be in the first place to talk to them. He will try to put himself in their place and understand them. If the player chooses the right thing to say, the enemy will see geometric shapes appear and the player will be able to choose the creature that has the same shape as the one that appears in order to bring down his opponent. Billy will have to be very patient and empathetic. Often, the creatures are unpredictable, so the fights are not always identical. In the end, Billy makes friends with the creatures and the world slowly regains its colors.

The game has a navigation system with a visual style reminiscent of The Legend of Zelda: Wind Waker. When Billy uses his boat, he must navigate through the colorful areas, otherwise evil arms appear, and bring him back to the last checkpoint.

Billy’s friends stay in the ship. Each creature has three levels and there are many characters to discover. When Billy talks to them in the ship, the allies ask for specific items. This will be useful for them to level up. These objects can be found all over the world. If Billy gives them the right object, he goes up much faster. Otherwise, they must be fed fish, but it is much slower.

The camera often causes problems. When the character is on dry land, the camera is automatic and cannot be manipulated by the player. It then sometimes hides the character or areas that we would like to see because the character can go there. It also changes angles in some key places and this can disorient the player. When Billy navigates using his boat named Friend-Ship (in English version), the camera is then manual and therefore steerable by the player, but this does not prevent some display bugs.

Finally, the game has three different worlds: that of fire, ice and desert. Billy goes through these different levels in order to give the world back its colors. He must find three colorful gems that will allow him to fight the Leviathan. During his quest, he will learn a lot about himself and will eventually accept himself despite his flaws. I think it leaves a great story.

Careful! The Nintendo Switch version has many problems with slowdowns, display, performance. We do not recommend this version.

Rainbow Billy is a one-of-a-kind game. He makes metaphors with psychological situations that can be real, making these characters so human. We also learn in the game that the main character is non-binary and he has difficulty accepting and loving himself. This makes Billy very endearing in my opinion.

All in all, despite some temporary bugs (character who gets lost in the setting, setting that disappears, etc.), the game plays very well. I recommend it to children from 7 to 12 years old. This game will not only allow them to reflect on some of the problems that people are experiencing around them, but it has excellent puzzles. This will allow children to perhaps consider the point of view of others and put themselves in their shoes to better understand them.

More information about the game: Official page of the game on the Manavoid website