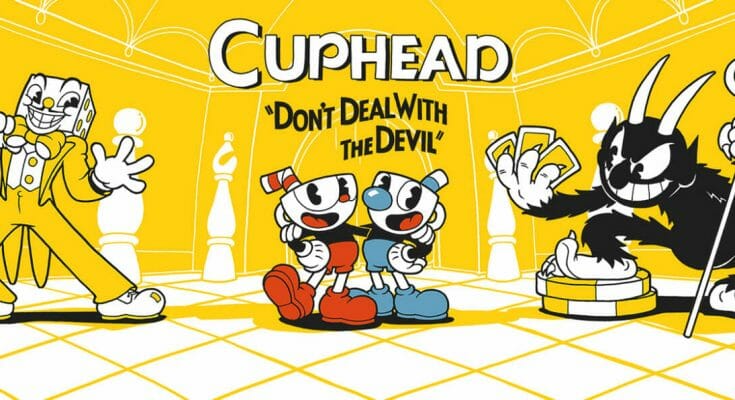 It only took a short trailer for the whole world to fall in love with Cuphead when it was announced at E3 2014. It was too good to be true. After three years of endless waiting, all our fears flew away from the first minutes of the game. Cuphead is a new indie hit, which has already carved out a place for itself in the hearts of gamers.

This extremely ambitious project comes from two Canadians: Jared Moldenhauer (Game Designer from Saskatchewan) and Chad Moldenhauer (art director living in Toronto). Why ambitious? Because all the characters in the game have been hand-drawn, which is very rare in the field of video games (apart from a few exceptions like Jotun or Sundered). Seeing the amount of animations of each boss, we understand that they worked hard during these few years.

Cuphead does much more than just “remind us of the cartoons of the 30s.” This style was not added after the fact: it is the essence of the game. The Moldenhauers are first and foremost passionate about the animation studio Fleischer Studios (which gave us Betty Boop among others) and this love is reflected in EVERY tiny detail of the game. The elastic movements of the characters, the psychedelic transformations, the grainy filter that covers the screen, the faded colors, the soundtrack, and that’s just what’s instantly visible. EVERYTHING has been thought out, studied, and carefully chosen to create a coherent and wonderful whole.

Cuphead doesn’t just have a pretty face: it’s a solid game, a tough “run and gun” like it doesn’t care anymore. The highlight of the show is the bosses. Twenty fights more imposing than the others, which all stand out thanks to their different attacks and their unique theme. The cartoon side of the 30s was perfect to add a little madness in all this. We fight against vegetables, a flower, a genius, a giant mermaid, in short, we never know what awaits us in the next scene. This is precisely a strength of the game: each phase of the bosses takes us totally off guard. It’s funny, intimidating and incredibly creative. These bosses will remain etched in your memory forever.

To add dynamism, some phases of the bosses are random. If we take the example of Baroness Von Bon Bon, you will have to face three of her servants before the final confrontation, out of the five available. You never know which one you’re going to stumble upon, so you always have to be on our guard.

Between the bosses, we walk on a map a la Super Mario Bros 3. No cutscenes, no transition between levels, no “platforming” passes before reaching the boss. We enter the level and the battle begins immediately. The lack of thematic coherence or transition from one boss to another could be perceived as a flaw, but when you think about it, it leaves a creative freedom to the developer that is ultimately a big part of Cuphead’s charm.

Questionablely the weak point of the game (simply because they are less impressive than the bosses), the “run and gun” type side-scrolling levels give us a well-deserved boss break. They are not easy, but if you are able to recover the five pieces that float there, you can then get character improvements from the friendly one-eyed pig Porkrind (or “ear of christ”, if there was a Quebec version!)

Each new projectile comes with its positives and negatives, as well as the charms you can equip. For example, a charm gives us a fourth heart, but the damage you inflict on enemies will be slightly diminished. Red projectiles (Spead) split into three and do more damage, but their range is much smaller. Basically, no weapon or charm makes the game easier, everything remains balanced. The advantage is that you can use strategy when you get to know a boss and equip your arsenal accordingly.

A third type of level also adds a little variety to all this: you control a plane in an environment scrolling to the right, like a space-shooter. Looking like nothing, Cuphead covers quite wide with its concept and succeeds in any case. Maybe the “run and gun” portions are less masterful than the bosses but I firmly believe they were essential to break the monotony and make it a game that feels complete.

We will not hide it: Cuphead is difficult. Maybe the “internet” puts a little too much, but you will still inevitably start bosses dozens of times to overcome them. That said, you never feel like a boss is impossible. You just have to learn the movements and attacks of the bosses, and after several tries, you end up making a perfect course and succeeding.

Obviously, each victory is proportionally satisfactory to the stress and effort put into it. I found myself screaming with joy at the sight of the word “Knockout” that appears when you finally eliminate a boss.

Never frustrating? That’s wrong, but we get angry especially with ourselves, especially when the challenge increases dramatically in the second world. A detail that makes all the difference: when you die, you are shown a timeline that allows you to see your progress in the level and number of phases of the boss. We see that we go further and further each time, it keeps us motivated.

Although you are offered the choice to beat the bosses in “simple” mode instead of “regular”, an achievement with easier difficulty will not allow you to unlock the next world. It should be seen as a “practical” mode, in which certain attacks or projectiles are not present. Cuphead may not be for everyone: you have to be a regular and patient player, but given that this is exactly how it is sold, it is not a problem.

Cuphead is available on Steam for a tiny $22, but if you own an Xbox One and a PC, the Windows Store version may be the best solution since it gives you access to the game on both platforms. Even better: the backup and your achievements are synchronized between the two machines.

You’re going to find me ridiculous, but there’s something moving about seeing such a passion project received so warmly by the gaming community (currently at 5400 positive reviews on Steam a few days before release). What are you waiting for? Get on the train and enjoy this little Canadian masterpiece too! I can’t wait to see what this team has in store for us in the future! Long live Studio MDHR and congratulations to the Montreal company Illogika for helping with the development!

Like Super Meat Boy, Braid or Limbo, Cuphead is one of those exceptional indie games that stand the test of time. Long live Studio MDHR.