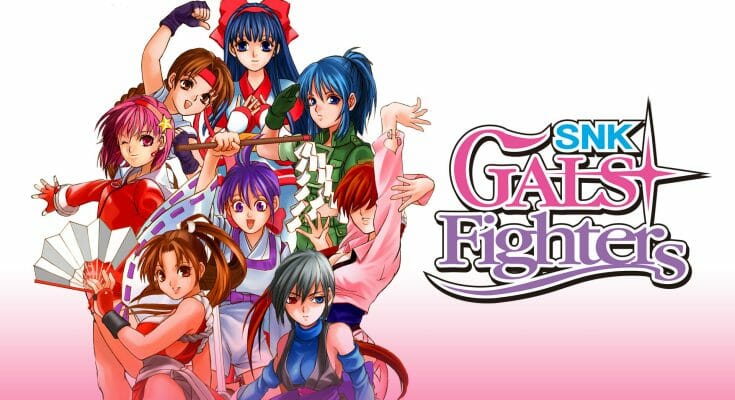 My passion for Neo Geo Pocket Color is no longer to be hidden. The SNK portable console released in 1999 had many quality fighting and arcade games, a rarity in the days of the Game Boy Color. But the console arrived during the Pokémon period, and like all of Nintendo’s other competitors in the field of portable consoles, it quickly fell into oblivion.

Nevertheless, for the first time in 20 years, SNK is paying attention to it and resurrecting its titles. And it’s CodeMystics that’s back in control. After taking care of the carryings of Garou Mark of the Wolves and Last Blade 2 and their rollbacknetwork code, they programmed an emulator for the Neo Geo Pocket Color games. If Samurai Shodown! 2 Pocket Fighting Series is already released on Nintendo Switch and is currently only available as a pre-order bonus for Samurai Shodown 2019, Gals Fighters is available on the eshop for everyone.

Gals Fighters is a 2D fighting game featuring 11 heroines from previous SNK productions. So Mai, Shiki, Yuri, Leona, Athena, Shermie, Akari and Nakoruru are available from the start. Whip, Yuki and Miss X which is a female version of the famous Iori, are to be unlocked, finishing the Queen of Fighters mode several times. Queen Of Fighters mode is the equivalent of Arcade mode in other games.

The game also has a training mode and then that’s it. No other mode. Some items are to collect and use during combat but nothing important.
If you’ll be happy to discover this good fighting game, it won’t keep you busy for long. Once you’ve seen all the fun poses and transformations of the heroines’ usual movements, interest will quickly build. It’s an aperitif game that can keep you busy during your public transport.

The emulator allows you to rewind, view the manual of the time, change the display and zoom of the Neo Geo Pocket that appears, and change the controls. You can even play touch screen, even if it’s not practical at all. We regret the absence of a correct list of movements, because the manual of the time contains many faults and omissions. Also, if you close it and open it, it constantly puts you back on the start page.

Not very practical to check the repeated movements. While it’s nice to change the color of the console that surrounds the game, changing the controls is hard work. The interface is catastrophic and I went back several times to achieve my goals. This is much more complicated in 2-player mode. Everything is poorly indicated and the interfaces overlap, we do not know why.

Yes, there is a 2-player mode, if 20 years ago, we had to buy 2 cartridges of the game, 2 consoles and a cable link to play, now we can play on the same Nintendo Switch.
2 ways to do here: The traditional horizontal mode with the 2 detached joy-cons and a screen that divides during the choices and gathers during the fights.
The vertical mode with the 2 joy-cons attached to the console, and… it’s just not practical. Manoeuvrability is difficult. We have 2 screens that are displayed as in the arcade tables at the time, and keeping the Switch aside is not ergonomic. In addition, the player with the left joy-con has no Option button, nor a way to map it.

So subjectively, I love the Neo Geo Pocket Color and I’m delighted to see this game that came to the end of the machine’s life.

But objectively, I don’t know who to advise this game. Nostalgics and fans are already thrown on, but there are more elaborate and interesting games for $10 too.
If you like to find Mai, Nakoruru and Iori dressed as a woman, go for it! The game is fun, but it won’t keep you busy for long.

Playable from 1 to 2 players.