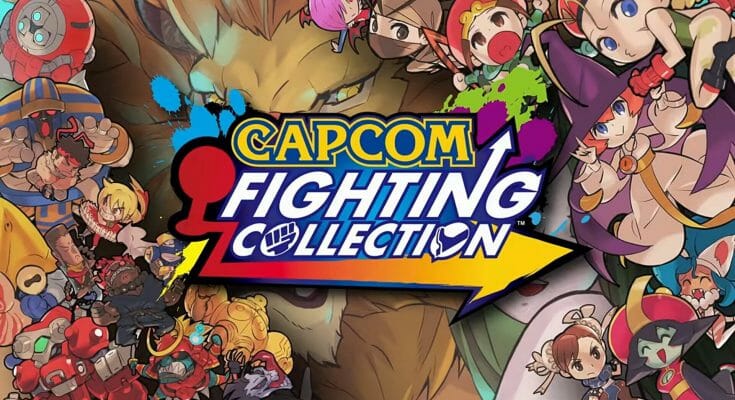 Capcom Fighting Collection is a compilation of 10 fighting games released between 1994 and 2003 by game developer and publisher Capcom.

These are arcade games, which were therefore intended for players to put a lot of money in the arcade cabinet every few minutes in order to continue playing after losing. It is possible to reduce the difficulty a little, but it remains difficult.

Presence of blood when the fighters clash. Female characters are often with wide necklines and have many suggestive poses. Many allusions to sex appear. Some attacks make the chest of the characters enlarge, their buttocks, cut them into 2, turn them into other monsters. All this is animated as in a cartoon, depending on the sensitivity of the people, it can shock, or be innocuous and ridiculous. These are games from the 90s mainly, so the representation of the characters is tinged with this Japanese patriarchy.

Very little dialogue. Provocations at the end of the fights and sometimes sexual allusions in the dialogues.

Representations of women in sexy poses and in small outfits.

Must know how to read for a few years to understand the menus.

Each game is very hard and time-consuming to learn. Some can be enjoyed by playing occasionally, but they are much better when you exploit their potential to the fullest. Many complex manipulations are required to perform the movements of most fighting games. It’s even difficult to play it with an ordinary controller and we recommend playing with an arcade stick, because the games were originally intended for this.

Capcom Fighting Collection is a compilation of the following 10 games in their versions as they were released in arcades at the time:

Above, in bold, the international name of these games. The other name is the Japanese name.

All 10 games are great titles. The top two on the list have aged the worst, and will only be pleasant for fans.

Super Puzzle Fighter 2 Turbo is not a fighting game, it takes the characters of Street Fighter but makes them compete in a puzzle game. To win, you will have to eliminate many blocks on your screen in order to attack the opponent. Like other games of the genre, we lose when our screen is filled with blocks.

Each game is very good, and is interesting to discover or rediscover. The selection of titles is however weird.

Super Puzzle Fighter 2 Turbo and Super Gem Fighter Mini Mix are the most affordable games of the lot.

It is possible to play in Arcade mode to each of the games. A second player can join the game at any time and face the first player.

A Training mode has been added for each of these games as well, while this did not exist in the Arcade versions.

A Gallery mode with hundreds of illustrations spread over the 10 games. That’s a lot of material that was used for the promotion of each of the games at the time.

You can also listen to the music of each of the titles in the museum mode.

Each of the games is playable online. You can either play it in “Casual Match”, no points taken into account and possibility to activate the simplification of manipulations for shots.

There is also the “Ranked Match” mode, with points taken into account, and simplified moves disabled.

Finally, it is possible to create lobbies to group 9 players and alternate fights with several players.

In all game modes, it is possible to choose several games to play, and if an opponent comes online, you will automatically switch to that game. This is a great feature that allows you not to divide the user pool into 10, for each game.

The quality of the compilation is much better than what we had seen before. We greatly appreciate the multitude of options at our disposal. Unfortunately there is no crossplay. That is, you can not play with opponents on other consoles or computers than yours. Since the game was released on 4 different consoles and computers, this means that the user pool is divided by 4. It’s a real shame because there are already very few expert players of fighting games who appreciate this kind of compilation, if in addition they can not play together, it spoils the interest of the compilation.

A very nice compilation but whose opponents are already very rare online, a few days after the release.

If you like Capcom’s compilations of old arcade games: