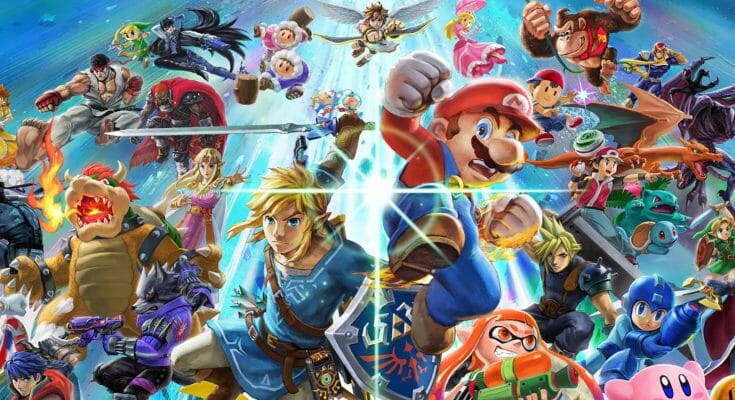 Choose your fighter from over 74 characters from across the video game universe and battle it out in epic battles in Super Smash Bros Ultimate!

The game is almost infinite. When the main adventure is over, there are still multiple quests to complete, hundreds of spirits to collect, and many challenges. It’s multiplied if you play with your friends and online.

The characters compete in many fights. No blood. When the characters lose, they’re knocked out. Attacks of fire, ice, electricity… are used.

A great tribute to the strongest licenses of the video game. It is a fighting game above all, but you can also play as a team and in cooperation.

Must have a few years of reading experience. Menus have icons but there are plenty of descriptions and texts to describe minds and other features.

It is possible to buy characters with their own levels separately or in batches. You can also buy additional costumes for Mii characters (characters that can be created).

Very high. It will take a lot of training for the neophytes to have a decent level that will allow them to enjoy the game.

Super Smash Bros Ultimate is an unusual fighting game. Firstly because it allows to compete 1 to 8 players simultaneously, instead of the traditional 1 vs 1, second because it has many objects and interactions with the levels, and finally because a huge tribute to video games with its ultra-complete gallery of characters coming from many different franchises and developers.

The principle of combat is also different. In a 2-dimensional arena, the characters hit each other, throw projectiles at each other to increase the percentage of their opponent. The higher the percentage, the more the opponent is propelled far into the air when he receives blows. Characters who come out of the arena by getting ejected or falling lose a point.

Players who lose all points, or who have the fewest points at the end of the allotted time, lose the game. A very original and unique concept that makes the games frenzied.

74 characters are available in the original game and more than 300 levels. It is possible to buy extensions (see Extensions below)

The main mode for fighting each other. All the rules of the game, all the characters, and all the levels are playable in this mode. From 1 to 8 players. One joystick per player.

2 opponents clash in this mode. They each choose 3 or 5 characters, and they will try to defeat their opponent with as many characters.

A tournament to determine who is the best in turn. Up to 32 players can register in this mode, but only 2 or 4 players compete in the pools.

32 players in turn. 1 to 4 players simultaneously.

A mode offering special rules to face each other like: everyone jumps very high, everyone can hover, everyone is tiny or gigantic.

A still-sudden mode, and a character elimination mode (General Smash) are also available.

Adventure:is a gigantic single player mode where you browse a huge map to unlock all the characters in the game little by little. More than 600 fights with many rules, characters, staged are waiting for you. 3 difficulty modes present.

Every time you buy an extra character (See Extensions below), it comes with themed fights available in this mode. Example: Buy Steve, allows you to fight Zombie, Creeper, Skeleton or equivalent in this mode…

A cooperative mode to face opponents controlled by the console. The fights are thematic. If you choose to play as Mario, for example, the game will make you face many opponents from these old games, or equivel.

To train without being disturbed by an opponent.

To face a horde of enemies in a single arena and break records.

Deal as much damage as you can to a punching bag to ship it as far as possible to break records. Available in Solo, Coop (2 players), Versus (4 players in turn)

If the 300 levels already available in the game don’t suit you, you can design yours also with many settings.

You can also listen to the entire game soundtrack whenever you want, and even in portable mode with the screen off.

You can check the slow motions/highlights/replays of previous matches.

Super Smash Bros Ultimate is unfortunately not very well optimized for online games. If you still want to play, it’s of course possible, but you have to expect many slowdowns, disconnections.

To minimize this, we recommend connecting a USB network adapter in the dock of the Nintendo Switch. It is purchased separately and costs about 15-20 CAD. This will allow you to connect a network cable into this adapter and get a more stable connection.

If you have a Nintendo Switch Lite or play in portable mode, this is not possible. It is then recommended to connect your console to the Wi-Fi network, 5 Ghz available. This improves the conditions a little bit.

If you have a Nintendo Switch OLED, you don’t need that. The network socket is already included in the dock.

See old matches of unknown players and bet on the victory of one of them to get points.

The character of the Piranha Plant is sold separately from everything else, for about 7 CAD on the Nintendo eShop.

Then there are 2 main extensions. Each contains its share of characters with their associated levels and music. These 2 extensions can be purchased as gift cards in stores such as EB Games, BestBuy or Amazon. They can be purchased directly digitally also on Nintendo’s website or via the links below.

The Fighters Pass 1 contains 5 characters, a level and associated music for each of them.

To buy The Fighters Pass 1, click here. (This supports Shared Screen. Thank you!)

The Fighters Pass 2 contains 6 characters, a level and music for associate for each of them.

To buy The Fighters Pass 2, click here. (This supports Shared Screen. Thank you!)

The characters (and level, and associated music) of each of the 2 extensions, can also be purchased individually but this is of course more expensive.

In addition to these 2 possibilities, it is possible to buy costumes separately for about $1 each. These costumes are dedicated to Mii fighters and are the color of many video game characters that are most often part of the same games as the main characters.

Super Smash Bros Ultimate is an indispensable game of the Nintendo Switch, an ultra-complete blockbuster. It will provide months, years of fun as long as one learns to play it. And the players made no mistake about it. More than 20 million units have been sold to date.

It is unfortunately spoiled by an online mode that has performance well below the standards known on other consoles, games, or PCs.