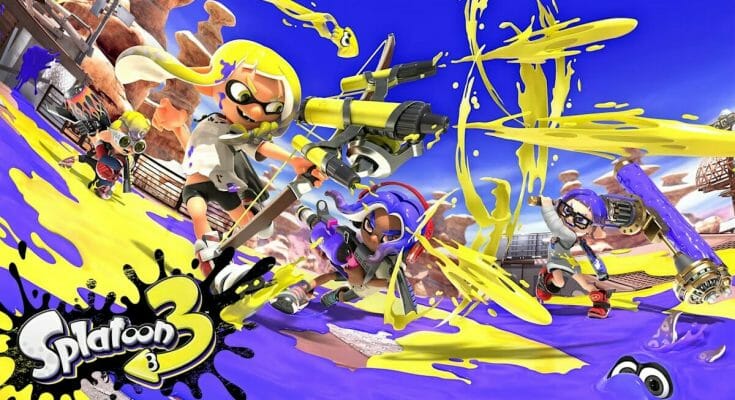 Splatoon 3 features children who can transform into squid called Inklings who battle arenas with colored ink shots. When in the form of squid, they can pass through the colored ink faster and hide. You play as a third-person Inkling and face enemies in various levels. The games are similar to paintball games.

Inklings characters shoot themselves with paint guns, paint rollers, ink bombs, ink rocket launchers and other gadgets creating ink/paint explosions. They attack similar characters and tentacles of enemies, and huge bosses. Some weapons may look like real weapons by far, but everything is being done to mitigate this and the very cartoon environment contributes to this.

Requires reading for years. Adventure mode and menus have a lot of text.

Against the computer, there are some pretty tough challenges.

You don’t have to have played Splatoon 1 or 2 to enjoy this game.

Splatoon 3 features children who can transform into squid called Inklings who battle arenas with colored ink shots. When in the form of squid, they can pass through the colored ink faster and hide. You play as a third-person Inkling and face enemies in various levels. The games are similar to paintball games.

Players can customize their own characters by choosing their hats, sweaters/t-shirts, shoes, and weapons.

Compared to Splatoon 2, players have two new Squid Surge actions: being able to load a jump when climbing a vertical wall in squid. After the charge, the jump is suddenly high and allows to surprise the opponents.

The Squid Roll , on the other hand, allows you to make U-turns quickly in squid in ink. Simply move in one direction in the ink and press Jump + the opposite direction to perform the manipulation. You will then hear a sound and you will see the squid shining to validate the manipulation correctly performed.

A story mode for a single player that lasts several hours. In Splatoon 3, the action is first set in a desert inspired by the world of the Mad Max movie. Then we switch to a world of ice until the end. The mission system is very much inspired by the Octo-Expansion of Splatoon 2. The player starts each mission in an airlock, where he sees how much it costs to try the mission, he chooses his weapon and he sees the possible rewards. The game encourages you to redo the same missions several times but with different weapons each time, which changes the approach you have to each obstacle.

Obstacles are both tentacled enemies firing paint projectiles at the player, and the environment. Indeed, many temporary platforms, treadmills, cubes and blocks, will make the player fall into the void.

This mode offers to take on players who have the game and a Nintendo Switch console near you. So each player plays on his console in local WiFi.

Players can either fight a private arena battle (from 2 to 8 players) or a Salmon Run (2 to 4 players) in cooperation.

You can play 1 player per console. Each of the games is played with 4 players against 4 other players. So you join a team automatically. Note that it is possible to play each of its modes with friends online.

Regular Battle : The classic confrontation mode of Splatoon: Turf War, in this mode you have to paint the arena as much as possible so that its color is the most present at the end of the 3 minutes of the match.

League Battle: Play with 1 or 3 friends (if you have 2 online friends at this time, it won’t work) online against opponents.

Salmon Battle: A cooperative mode with 3 other online players where we face hordes of monsters that arrive in successive waves.

Every 2 hours a zone/arena rotation, where players compete, takes place. At this time, the player is NO LONGER interrupted by the characters presenting the news in the game, who explain what the current new arenas are. In Splatoon 3, unlike Splatoon 2, players have the choice of whether or not to watch the ad.

Every few months, there are themed events (ketchup or mayonnaise for example, or Mushroom or Star of Mario) where players join the team of one or the other of the presenters for a weekend/weekend. At this time, all the matches made and won, allows the presenter to earn points. At the end of the weekend, the team with the most points receives rewards.

Note that during our online game tests we encountered many random “communication errors”. And from the moment only one person disconnects in the 8-player game, everyone is interrupted and out of the game (instead of being replaced by another player, or an opponent controlled by the console as in other games).

The frequency with which these interruptions occurred made the experience a bit frustrating. Hopefully these are just issues with the game’s launch, as the Splatoon 2 experience was really enjoyable.

For big fans of Splatoon 2… you have already purchased the 3. 🙂

Those who had occasionally played Splatoon 2, will not find more interest in it. Splatoon 3 is a formal sequel. Other levels, other arenas, many old and new costumes and arenas. No major changes likely to convince you here.

Those who want to start the series, Splatoon 3 is a very good place to start. There is a tutorial, the game is very complete and can entertain for many hours. And there is no need to have played the previous ones as shown above.

Splatoon 3 is a great game with a lot of content. However, it will require dexterity to overcome all obstacles and be able to survive against online opponents. We do not recommend it to video game beginners.

On the other hand, for those who are used to video games, to move in 3D environments, whether in Zelda Breath of the Wild , Fortnite , or Roblox , we recommend it without problem.