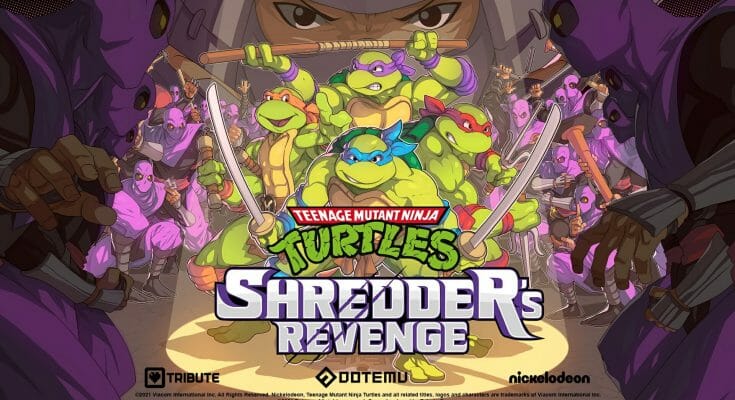 Choose your favorite ninja turtle and battle hordes and hordes of enemies in multiple levels. Teenage Mutant Ninja Turtles: Shredder’s Revenge offers a new progression fighting game, similar to those released during the 90s in arcade, Super Nintendo and Genesis/Megadrive.

ATTENTION: On Nintendo Switch you can not use 2 joycons for a single player, when more than 4 players are in the game.

ATTENTION: Only 1 to 4 players possible locally on Playstation 4. On the other hand, you can get the 5th and 6th player with an online game.

Everyone fights with punches, foot, knives, firearms, magical attacks (fire, wind, ice, electric). These are anthropomorphic animals, humans and robots that clash with each other. No drops of blood, or injuries. They are cartoon characters.

It is possible to teach cooperation through this game, as long as you are well supervised and surrounded, but that’s it. The characters are smiling, having fun. No one takes themselves seriously.

Very little text. Playable without knowing how to read. However, you have to know how to read to understand the side quests and some challenges.

Choose your favorite ninja turtle and advance through the levels by hitting and defeating all enemies to progress.

The story mode consists of going through the 16 levels of the game. The more enemies you defeat with a character, the more skills you unlock for that character. Progress is saved. You can try a level again at any time or play a previous one. Many side quests and collectibles are present.

From 1 to 6 players. Playable with people online.

All 16 levels of the game must be played in one go! Like arcade games in the 90s, lives are limited and progression is not saved. Character skills are unlocked from the start but are limited for balance.

To be reserved for the most experienced players.

From 1 to 6 players. Playable with people online.

Requires a subscription to the online game, to be able to play online on the console on which you have the game. No subscription required on PC.

The 2 modes are playable online. No additional online mode.

PC and Xbox players can play together online. However there is no way to invite your friends who are on a different platform. So this is not practical at all. And consider that you can only play with your friends on the same platform.

This game is awesome. It is aimed as much at nostalgic for the old games released 20 years ago, as for today’s children. It is neither too long nor too short, very well done. AND it runs on any PC without any problem, it has been very well optimized.

The graphics are very detailed and very beautiful. I dare not even imagine how long it took the artists and animators to accomplish this.

Enjoy this game without problems, especially since it comes out at a low price, and is available on Xbox Game Pass when it is released.