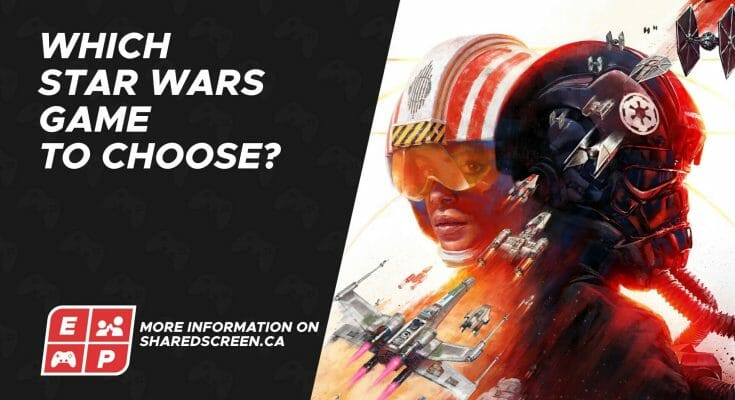 Star Wars is a cult film saga that has been one of the forerunners in the sale of merchandise related to its universe. And who says popular franchise, says adaptation in video game. Today we decrypt the recent titles released on current consoles and computers.

Among these titles, many of them are games previously released on consoles and computers of the past, and have been made available on current machines. For all these games, please check out our article about retro Star Wars games.

The games are all very different. It depends on the type of experience in the Jedi universe you want. Difficult to advise a particular title.

Please see our article “Which LEGO Game to Choose” for more details.

This is a third-person and first-person shooter. The action of the game takes place between the movies Star Wars VI: Return of the Jedi and Star Wars VII: The Force Awakens. You will play as many characters and shoot hundreds of enemies, whether in the one-player story mode, or in online multiplayer. It is possible to improve the skills of each of the characters with many cards. These cards can be obtained by playing for long hours. The game is very faithful to the movies, and many environments take up the best moments of them.

If the game has a bad reputation with gamers because of these beginnings where you could buy lootboxes to improve your characters with real money, the game has been corrected since the criticisms came out in large numbers. So there are no more microtransactions.

It is an arena team fighting game. In the manner of League of Legends , you choose your favorite hero/champion, and you compose a team to face the opposing team in the arena. On the menu of selectable heroes: the heroes of the revolt, bounty hunters, and stormtroopers. Each hero will have their own skills, and you will have to choose heroes who complement each other in order to fill the strengths and weaknesses of your team.

Developed by Zynga, the game is likely to be very aggressive in its monetization, like previous games designed by this developer. More details will be available, when the game is released.

For 1 player per console or cellular online, with matches of 8 players.

Coming soon to Nintendo Switch, iOS and Android in 2022. No date announced.

If you have already played tomb raider or Uncharted games, this Star Wars takes the same structure. This is an action/adventure game where you play as the Jedi, Cal Kestis who explores planets in his escape from the empire. The game is played in the third person, and players travel through many environments in order to search for other Jedi and fight the forces of the Empire. In some sequences, players can use vehicles, giant robots and other spaceships.

It is a remake of a Star Wars role-playing game that was highly regarded by the public when it was released in 2003. The game is currently in development, and is planned for current platforms.

The story of Knights of the Old Republic takes place nearly 4,000 years before the formation of the Galactic Empire, where Darth Malak, a Sith Dark Lord, unleashed a Sith armada against the Galactic Republic. The player’s character is a Jedi and must venture to different planets in the galaxy to defeat Malak. Players choose from three character classes (Scout, Soldier or Rogue) and customize their characters at the beginning of the game. They take turns fighting against enemies.

By interacting with other characters and making plot decisions, players can earn points from the light or dark side of the Force to determine their alignment.

After the exclusivity (we do not know the duration of it), it will be available on Xbox One (Xbox Series Compatible),

As the name suggests, this video game allows you to play 19 pinball tables in the colors of Star Wars. The game takes elements from the following movies:

Thanks to your progress through the pinball tables, you will be able to progress towards the eternal binary choice that is the light or dark side of the Force.

To be reserved for the most passionate fans of the franchise.

For 1 to 4 players locally.

Do you love the Tie Fighter, Millennium Falcon and other Y-Wing, X-Wing of Star Wars? This is the game for you. In Star Wars Squadrons, battles are fought exclusively aboard all of its first-person spaceships. The game takes place after the movie “Return of the Jedi”.

Players take turns controlling 2 pilots, each on one side of the war, through a variety of combat missions. When you play a pilot on the clear side of the force, you control X-Wings and other ships to protect, and escort allies and civilians to safe places.

On the dark side of the Force, you attack civilians, refugee ships, fuel depots, relief workers and opponents.

The game was acclaimed for its very pleasant multiplayer part. It seems that the single-player part of the game lacks content.

It is possible to play this game in VR.