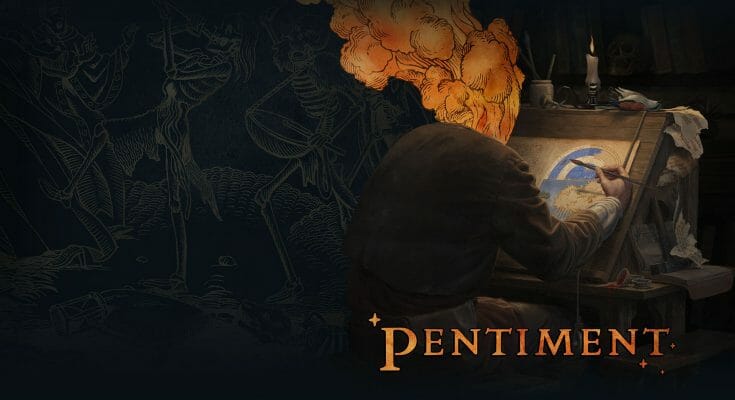 Pentiment is a narrative adventure game, taking place in Bavaria (Germany) in the sixteenth century at the very beginning of the Renaissance, a period upset by religious and political changes.

While getting to know various characters with various social classes and personalities, the player will find himself embroiled in crimes, scandals and intrigues to unravel.

In the face of the chaos and turmoil of this era in Europe, every decision is subject to repercussions on the future.

Through a prodigious artistic direction, seeming to tell us a story through old books, the player embodies Andreas Maler, master craftsman, residing in a village for some time in order to fulfill his contract with the local abbey.

The murder of an influential personality within the abbey will upset the daily life of the whole village. It is our old friend, Piero, who will be wrongly accused. Driven by this rage of injustice, the player will investigate throughout the village in order to exonerate him.

Like a point and click, the player is led to explore the different environments of the village. It will pass through the houses of the inhabitants, through the forest full of secrets to the nooks and crannies of the entire abbey. Collectibles , objects to recover, will advance the investigation and sometimes even provoke friendly and immersive mini-games.

In addition to socializing, or not, with all the inhabitants and animals, it should be noted that every word or action will have consequences. It’s up to you to choose your destiny, reputation, allies and enemies.

A little customization: The player has the option to choose some of Andreas’ personality traits such as his past, interests or studies. This will unlock certain dialogues and actions.

Type of game: Narrative investigation
Average length of a game: According to the desires

The game was provided by the publisher for review. It does not influence our opinion.

At a time when violence was part of the daily lives of young and old, it is explicitly told and shown in the manner of drawings.

No voices are available for dialogue. In addition, the font is a bit difficult to read although a more neutral font is offered at the beginning of the game.

The spoken manner of that time was different, filled with cultural and religious references uncommon today. Sometimes it is possible not to understand all references, although a glossary is available at all times. If the player wants to satisfy his general culture, he will be welcome.

At the vulgarity level, this remains neutral although there are references to murder in a light way.

The message will depend on the player’s choices and the personality he would like to represent. Keeping faith in religion as a priority? Prefer to sow discomfort by making a reputation as a heretic ? Want to be kind and sociable ? Preferring to be introverted or raw with the other characters?

The game is primarily narrative and is very accessible. Just move, face some easily achievable puzzles while leaving a minimum of reflection. The difficulty is social : knowing how to seduce the other characters in order to later have a favor from them.

Although the game is available with a mouse only, I recommend playing it with a controller for added comfort.

The game is only played in local single-player, in story mode.

Although the main subject is a murder to be solved, it does not monopolize the entire experience of the game. The player is led to build social relationships by making his own choices. It is possible to disrespect an old lady or a teenager just as it is possible to choose impartiality in certain situations.

The game does not require specific physical and mental skills. The minimum required is to know how to read and move via the click of a mouse or the joystick of a controller.

The mini-games make the experience more immersive, putting us in the shoes of this master craftsman. Although they are simple and fast, some require a minimum of reflection not blocking us for a long time or jumping to the eyes by its simplicity. Have you ever dealt with fresh sheep’s wool? You will have the opportunity to try for example!

I recommend Pentiment for players who love narrative games and are fond of investigations to solve. The game remains very human with its social and political dilemmas encountered.

However, I do not recommend it for children. Reading would be painful for them, would make them lose interest in a language a little complicated to understand and in the face of philosophical and political references. The subject of the murder remains explicit in the face of dialogue and visually (blood is visible or even a scene of decapitation, although it is romanticized).

View all posts by Sharon Ribeiro →