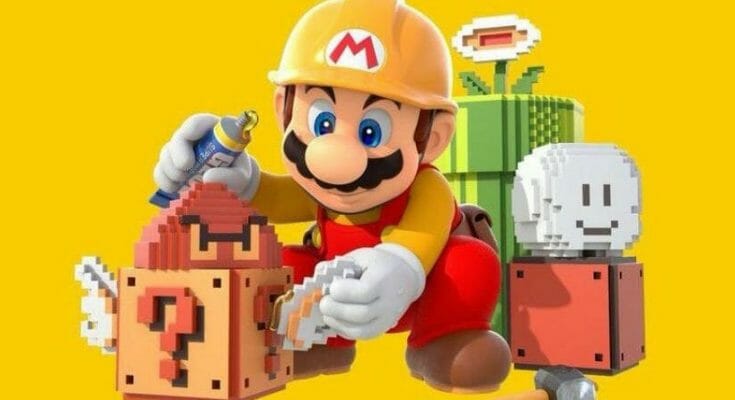 Released in 2015, on the now defunct Nintendo Wii U, Super Mario Maker had delighted plumber fans by proposing to create their own platform levels for Mario. Fans could then upload their creations and offer them to other players.

And it was millions and millions of levels that were made available to everyone for better and especially the worst. Lots of levels were just disastrous in terms of design, even sadistic, causing suffering the unfortunate player who dared to try them for many hours. This did not prevent the game from being a commercial and critical success, and many tactics, strategies and ways to create levels were invented with this new tool.

Four years later, the Nintendo Switch is now on the market and hosts a suite presented in length in a Nintendo Direct.

On the menu, lots of new items to add to your level, the ability to create 2D levels that focus on elements of Super Mario 3D World, multiplayer modes, level search options…. In short, what it takes for a sequel.

However, the first episode was perfectly calibrated for the Wii U Gamepad, so how does it work on Switch?

This time in level editor mode, you use either your fingers in portable mode, to draw the items where you want, or your controller in TV mode.

The DS stylus doesn’t work surprisingly on Switch. The European version had a special stylus for those who pre-ordered the game. I don’t know why one works and the other doesn’t. In portable mode, the creation of levels is correct. In TV mode, it takes a while to adapt, because absolutely all the buttons on the controller correspond to a function. I still have a hard time adjusting to that. I would have preferred a cursor system across all the menus.

There are also many new elements that can be put into its level. In episode 1, the new elements were introduced gradually into a grid.

In the 2, everything is available but you have to click the Search button, and then navigate a set of radial menus…. Then we go back to the level with his element, then for a second, we have to click on Search.

It’s really not practical at all. While the last 10 elements used are still available at the top of the screen, this is far from the ergonomics of the first title.

I don’t understand the change.

You can now play up to 4 players in the levels.

Online or locally, Mario, Luigi, Toad and Toadette will fight or cooperate to cross millions of levels. Namely, you can select the character you want in all solo modes as well. Unique sprites and animations have been created for Luigi, Toad, Toadette for super Mario Bros 1 and 3 levels, and Super Mario World.

For now, you can’t play online with your friends at Super Mario Maker 2. Faced with a flurry of comments that found the decision illogical, Nintendo promised to deliver matchmaking with friends in a future update.

That is, online you only play with strangers in Coop and Versus, and if you were the type to find the online mode of Super Smash Bros Ultimate wrongly done, you might as well tell you that you are not at the end of your sorrows. It just doesn’t work. Of the 20 games I tried in the 2 game modes, they were all disastrous in terms of latency. It slows down all the time, there is a lot of delay with each jump, if someone disconnects in the middle, it slows down for a minute.

You’ll have to play with 3 friends and 4 controllers on the couch.

Another problem, to many, the game behaves like a New Super Mario Bros Wii U, with each death of a character, the game freezes half a second voluntarily, cutting the momentum of the other characters, and can take them to a fateful fate.

In theory, deaths are rare enough to interfere with gameplay, but in the sadistic levels of millions of players, this becomes unbearable. The camera can’t keep up with the 4 players, and for some reason, it doesn’t move forward as long as the 4 players are in the same place. For platforms with a seat, this is a problem because the characters have collisions with each other, can push themselves and even lift themselves.

The multiplayer mode is more like a romhack than a well-developed mode, the fact that the levels are not calculated for more than one player, contributes in particular.

Fortunately, it’s more of an anecdotal mode than anything else.

The main interest of Super Mario Maker 2 comes from the new elements and its new History mode. This allows to rebuild a castle for the Toad by accumulating money. This money is given when you finish one of the 100 levels created by Nintendo. This is an excuse to teach you how to play the game and how the new tools work. This also ensures, that at least 100 levels in this game will be good, instead of struggling to look into those created by users.

Among the new selectable sets and other additions, there is also a soundtrack much more inspired than in its predecessor. Here each music can be selected to accompany any environment. It’s up to you to remix the Mario saga in all situations! These are so successful that you start singing them during the course of a level.

To conclude, I would say that the Story mode, the level creation mode, the fact of being able to play at user levels are worth the price of the game.

The lifespan is endless as long as the servers are online. Those of Super Mario Maker 1 still are, so you have a long time to try to exhaust its infinite resource of levels. I hope that the multiplayer mode will be patched in the near future.