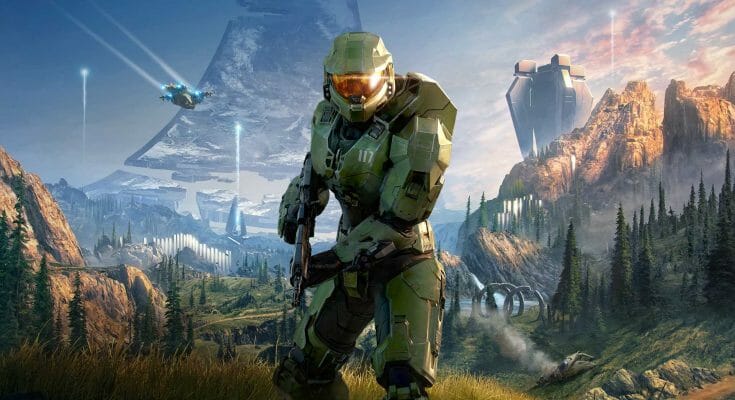 Halo Infinite is a first-person shooter, where an overarmed space soldier fends off an alien invasion.

Named Master Chief, this is the character you will embody throughout the story.

Halo Infinite is a sequel to a long series of highly regarded Halo games.

If for the moment, there is no way to play the campaign mode cooperatively (neither locally nor online), the developers have promised an update making this possible. The “campaign” mode corresponds to the story mode. It is this one that is sold for $ 80 + taxes in disc format or digital format.

The game is included in Xbox Game Pass.

It’s about seeing and discovering what has happened to the Master Chief since the previous episode, and how he will cope.

For once, the level structure is … Open. It is an open world that we explore equipped with a maximum of 2 weapons at a time, sometimes borrowing extraterrestrial vehicles and weapons.

If the way of moving, shooting, moving is MUCH more pleasant than in Halo 5: Guardians, I am still disappointed by this campaign mode.

Even in normal difficulty mode, the difficulty is unbalanced, all we do in the game is go through terrestrial environments or alien complexes hundreds of times, arrive on a horde of enemies who shoot us all at once and start again until we have managed to get rid of them one by one.

The terrestrial environments are always the same, and the worst comes from the alien complexes of which you will see the same rooms more than thirty times during the adventure. In previous episodes, the levels and their design were much more neat. The open world is useless.

The Master Chief can now use a grapple after a very long and slow tutorial. It allows you to grab explosive contents in order to throw them on enemies, and to cling to walls, enemies, vehicles. This is a considerable addition that makes traveling more enjoyable in a world a little too big for the character, where we often look for vehicles present in small quantities only.

The campaign will probably be more enjoyable in cooperation, but I forced myself to finish it to be able to judge it and I do not recommend it.

On the other hand, if you want to browse neat and playable two-player story (campaign) modes: I recommend Halo: Master Chief Collection. Available on Steam, Xbox One, and Xbox Series. This includes Halo 1,2,3,4, ODST, Reach… The collection is available on Xbox Game Pass too.