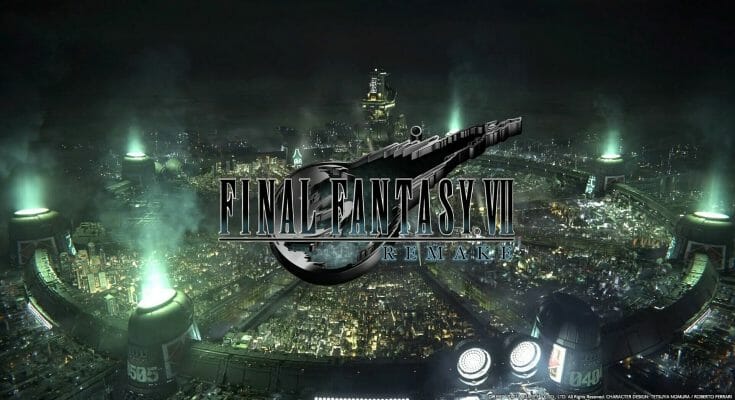 Final Fantasy VII Remake is a reinterpretation of the playstation 1’s cult game, Final Fantasy VII. Take over Cloud Strife, the mercenary who joins a group of eco-terrorists to stop Shinra from absorbing the planet’s energy, and oppressing the population.

Attention there is a better version of this game: Final Fantasy VII Remake Intergrade for the Playstation 5.

If you purchased this game on Playstation 4, you’ll be able to get the graphic update on Playstation 5 for free. However you will have to buy the off-series episode “INTERmission” containing Yuffie separately.

If you got this game through the Playstation Plus promotion, Square Enix has not yet offered a solution to update your copy.

Many fights with knives, guns, punches, kicks, magical attacks of electricity, fire, ice, wind… Summoning and fighting monsters, soldiers, robots, aliens. Many sound impacts, sounds of screams of pain, explosions. At one point the game suggests impalement of a character, but this is done off camera. And a character gets shot several times while climbing a flight of stairs.

Many violent words, threats, combat provocations. Many sexual innuendos. Evocation of alcoholic beverages on numerous occasions. The words ‘sh’t’, ‘a’shole’ and ‘pre-ck’ appear in the dialogues as well.

The hero and his friends team up to save the planet and protect it from its outrageous exploitation.

It is possible to buy a Digital Deluxe Upgrade.

And it’s totally useless and it’s not worth it.

The combat system is as difficult to handle as it is jubilant to play. You have to constantly juggle between 2 or 3 characters, change the camera of meaning, choose the orders for each of them. Many players find themselves distraught at such an action. Those who cling to it and persevere take great pleasure in it.

You don’t have to have played other Final Fantasy games to enjoy this game. The story is completely independent.

Indeed, if Final Fantasy VII Remake takes over and reinterprets the classic Playstation 1 game to current quality standards, it does not do so entirely. FFVII Remake is Part 1 of this reinterpretation, and the rest is not yet available, and is under development at Square Enix.

Final Fantasy VII Remake is a masterpiece with impeccable achievement, and many wise choices made during the design of the game. There were many ways to miss this Remake, 23 years later. The company and the way we design the games have totally changed, but Square Enix has achieved this feat, with gusto. Let’s hope the sequels manage to reach that level of quality placed so high.