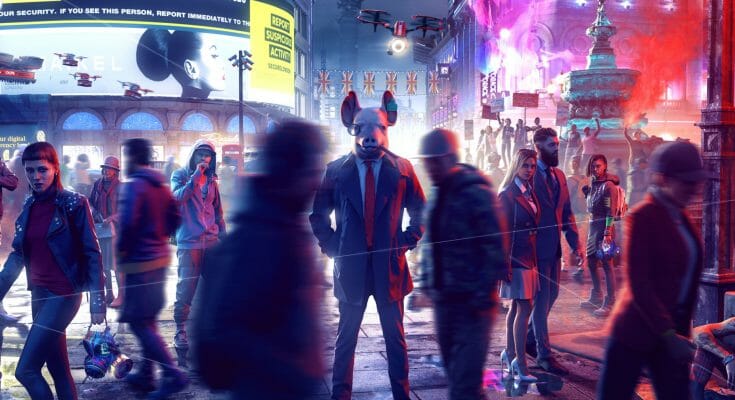 summary: Set in a fictional depiction of a future dystopian London, the story of Watch Dogs: Legion focuses on the hacker group DedSec as it seeks to erase its names for a series of bombings for which they have been wrongly charged, as well as to free the citizens of London from the control of Albion, an oppressive private military company that has turned the city into a state of surveillance.

The game has a story for about 17 hours.

Lots of violence, fighting, murder. Players use firearms and melee weapons such as pipes and deer feet. The fighting is punctuated by cries of pain and blood effects.

The game also contains sexual material: There are neighborhoods with many sex shops that promote nude dancers and sex toys. Some missions refer to prostitution.

Some sequences may contain screen distortions and alternating movements if the player’s character chooses to consume alcohol and there are also references to drugs.

The game also has a coarse language, punctuated by threats and swear words.

Many swear words, threats appear in the dialogues.

The defense of the futuristic city of London through combat and computer hacking….

It is possible to buy extensions called “Season Pass” to extend the adventure. These will come out over the years. You will have access to a mission called Bloodlines, a mission that is after the main story. You’ll be able to unlock four iconic characters from the series: Aiden Pearce, Wrench, Mina and Darcy. And you’ll have three additional missions given by Ded_Sec called: Not in our name, Guardian Protocol and Swipe Right. All of this is available in the Season Pass.

It is also possible to buy virtual currency to unlock exclusive weapons and costumes. All of these purchases are optional though.

There is also a multiplayer expansion planned in the future.

Watch_Dogs Legion is the third installment in the Watch_Dogs series that debuted in 2014. The game takes place in a universe whose technology is both your greatest ally and your greatest enemy. You are a hacker and your cell phone will serve you throughout your adventure in order to move forward. It will be useful in order to open doors, look through cameras, control drones and more.

Taking place in a dystopian future in London, you will play as multiple characters each with their own characteristics in order to enlarge your team. The vigilante group you will recruit on behalf of the DedSec organization will be guided by Sabine Brant and her loyal AI, Bagley. You will be able to recruit people from all walks of background, even your enemies. Up to 45 recruits will be able to be part of your team.

The local game mode is played to one player only.

Watch_Dogs is a series that highlights the various dangers of technology, while also putting its strengths forward. However, it shows that there are people who will always defend our rights. Despite the resemblance to the real world, we will always have protection against those who abuse.