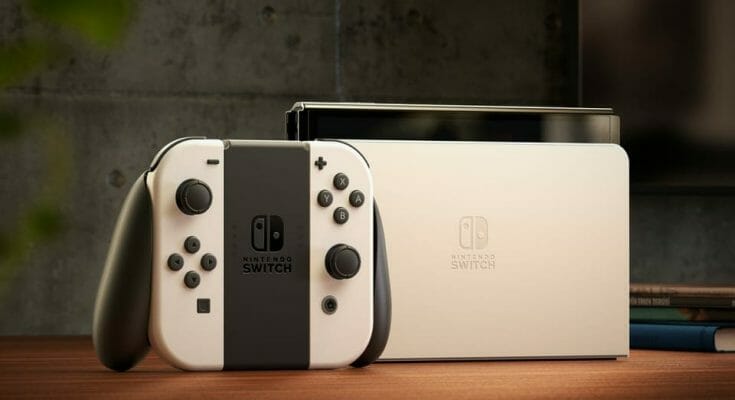 To date, two models of the Nintendo Switch have been released: the original Nintendo Switch,available in gray or red and blue. With 32GB of internal memory, and three different modes to play, the hybrid console has delighted fans since its release. 89 million units have been sold to date.

Nintendo then released the Nintendo Switch Lite on September 20, 2019, a portable-only version of the console.

The OLED model is a new model of the Switch console. The OLED screen is 7 inches whose pixels produce their own light. This type of screen, existing on the market for a few years, accentuates the contrasts in the image.

What are the other additions?

Many adjustments have been made with the new model. So there is a larger foot to keep it in place when you want to put it in “tabletop” mode. There are also many positions whose foot angle you can adjust. Making it more comfortable and resistant than previous models.

The sound coming out of the console is also noticeably better in portable mode.

The Nintendo Switch OLED has an internal memory of 64 GB so that it can hold more games. Since the release of the Switch, Nintendo has agreed to have some games on its platform that take up more internal memory. This resulted in an internal memory that filled up quickly for multiple games. So you don’t immediately need a memory card in order to play certain games.

The screen is larger than the original Switch. The screen of the original Nintendo Switch is 6.2 inches, while the OLED is 7 inches. Although OLED is heavier, the screen features OLED technology and has better visual quality that is well suited for the screen.

A port to connect a network cable is now also available, on the dock when playing on the TV. Previously, you had to buy a separate network adapter or play constantly in Wifi, which is less efficient than a wired connection.

Why the price difference?

The OLED Switch is a bit more expensive, as it has a different display. It has a better visual quality than previous versions. Better audio, better storage capacity and better screen.

Consoles have different additions when they are released. It’s not uncommon that after the release of a console, they release a new version of that same console with a few additions.

Is it better than another Switch?

If you want to get a console with the capabilities of the Switch and the new OLED screen, this is the console for you. It is compatible with all Switch games that have been released before. Perfect for all tech enthusiasts, you’ll love the new audio-visual quality of the Nintendo Switch OLED.

Personally, I wouldn’t buy the new console right away, but it would make a great Christmas gift for all Nintendo fans. On the other hand, for a home console, it is a little outdated, because in terms of visual quality, the PS4, released in 2013, already has better assets.

For more information on the differences between Switches, you can check out Nintendo’s official page.