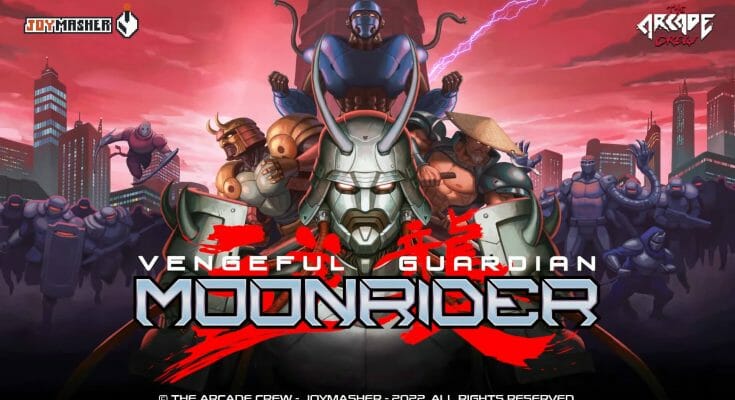 I was able to play Vengeful Guardian Moonrider at Gamescom 2022 in Cologne, Germany.

It is a new title from Joymasher , the Brazilian studio behind Oniken, Odallus, and Blazing Chrome; three pixel-art productions inspired by the 90s and platform/action games of this era.

Vengeful Guardian Moonrider continues in this momentum and is inspired by Shinobi, Ninja Gaiden and MegaMan mainly. It is therefore intended for experienced players looking for challenges.

But I let one of these co-creators, Thais Weiller , game designer and producer, introduce it:

The other co-creator is Danilo Dias , artist and game designer. Both are very vocal on Twitter and never are at a loss for words. 🙂

I was able to try the game quickly and already I find the title of the game a little long and dissonant.

Otherwise it’s beautiful, pretty, well animated. The hero handles well, although I’m not used to controlling such a big one in this kind of game. It was difficult to assimilate the many actions of this one in such a short time.

The levels presented were unfortunately a little difficult too, it was necessary to perform a good number of manipulations quickly. The game is still in development so there were bug issues and misplaced cameras that required the player to jump and advance on platforms that we didn’t see.

The player was also constantly assaulted, and went from ordeal to ordeal with each step. The pace of the game is not yet well balanced. Unless the demo presented us with one of the final levels, the player should be able to have some moments of respite.

But I’m not worried, given Joymasher’s portfolio, no doubt that the game will be balanced and corrected by its release in autumn 2022. I can’t wait to see more.

The game is planned for Playstation 4, Nintendo Switch, Steam PC and is published by The Arcade Crew and DotEmu.