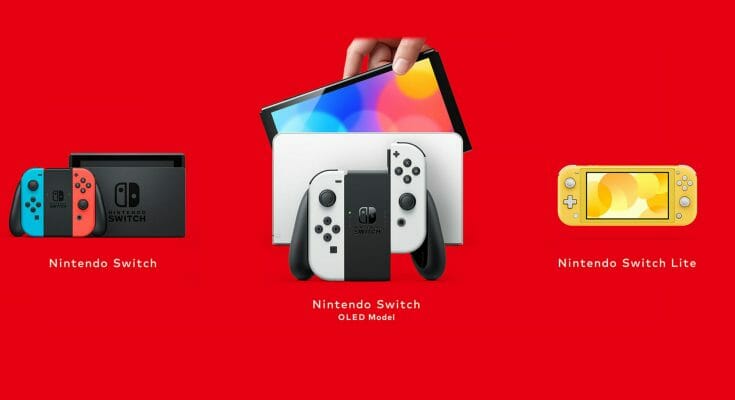 Nintendo, one of the veterans of the video game industry, has always triumphed in the portable console market, whether with the GameBoy, Nintendo DS or now the Nintendo Switch.

The Nintendo Switch is a hybrid console. It can be taken with you or be plugged into the TV via a dock.

It exists in 3 models:

Nintendo Switch: the normal, ordinary model that can be played in handheld mode or on TV

Nintendo Switch OLED: the normal model but improved, with especially a better screen (OLED so), which can be played in portable mode or on the TV like the ordinary model. More details about this model here.

The 3 console models can accept games in 2 ways:

Downloading a game takes up a lot of space on the console and all 3 consoles have very little internal memory.

The Nintendo Switch OLED has 64 GB of internal memory.

The memory can be increased by inserting a micro SD card sold separately, of the size of your choice. Personally, I find that there is enough to put many games already with 128 GB or 256 GB. Count the price of the Micro SD card in addition when you buy the console.

Among the most well-known, reputable and sold games are:

There are a lot of quality games available on Nintendo Switch right now. Some games are only sold digitally on the Nintendo eShop.

We also have a quick guide to hover over and understand what is what: Nintendo Switch Games Guide.

This is an annual subscription that you pay to be able to play online in games that allow it. Otherwise the online functions of games, such as Mario Kart 8 Deluxe or Splatoon 2, are restricted.

The subscription also allows you to save your games on Nintendo’s cloud (on online servers). That is, if you lose the console, or you are used to changing consoles often (between a Switch and a Switch Lite) you will be able to continue your progress in the games as long as you are connected to the Internet and you have recovered the latest backup.

Finally, the subscription gives access to NES, SNES and games like Pac-Man 99 and Tetris 99. More details in this article.

Be aware that the online features and their performance are very bad. It is very difficult to play in good conditions with this console even with a wired connection. If you have a choice, prefer playing on computer or Playstation or Xbox consoles to play online.

In addition, even if you have a very good Internet connection at home, the Nintendo Switch console will only accept a very low speed. Maximum about 70 Gbps download.

To play the exclusive games of the online console, such as Nintendo games, you will unfortunately have to go through this.

If you play a free online game like Fornite or Apex Legends you don’t need a Nintendo Switch Online subscription.

Outside of gaming, the Nintendo Switch doesn’t know how to do much. There are YouTube, Twitch and Funimation apps (not available in all countries) and that’s it.

The performance of the Nintendo Switch

Nintendo Switch consoles are not very powerful technically, they are technically inferior to a Playstation 4 released in 2013.

That is, for each game requiring large graphics resources and which is available on several consoles, the Nintendo Switch version will always be lower graphically, and lower than the level of online gaming too.

But it’s the only portable console currently on the market! It’s hard to fit so many high-performance components into such a small device.

And game performance isn’t always what players are looking for. Many games are of excellent quality without being on top of the technology.

Nintendo has a big advantage, these exclusive games are suitable for everyone. Women, men, children, of all ages, there are games adapted for everyone.

This is unfortunately not the case for other consoles, which lack titles adapted for children in particular.

Nintendo games in addition to being the great strength of the console, are also very often playable with several: from 1 to 4 players for many titles. In our game sheets, we constantly specify this when this is the case.

Do I need to buy a Nintendo Switch console?

Would you like to play with a console in transport or when you are on the move?

Yes. Compared to smartphone games, Nintendo Switch games are much better, and the controls are much more precise because you play with buttons instead of a touch screen.

It’s more expensive to buy a dedicated console and these games, than a smartphone you already have but it allows you to enjoy the video game much better, instead of being frustrated by mobile games filled with ads, frustrations and that can be stopped overnight because not enough people play the games. And this even if you have spent money on it.

Do you want a console to play with your children or family?

Yes, it’s the right console for that.

Would you like a console to play a first-person shooter online?

No, graphics and online performance is below other consoles.

Can I play Minecraft on it?

Can I play Mario, Animal Crossing, Zelda on it?

To make up your mind, compared to other consoles, find 5 games that you like. If you can’t find 5, it’s not worth spending money on this console.